an international day against video surveillance 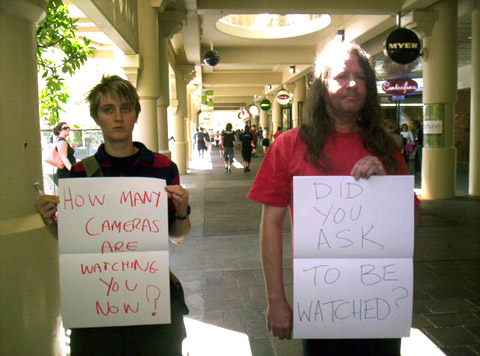 Mar Bucknell says: "Well the third action of the Perth Surface Group was very interesting for testing the boundaries of the debate we've been having about how much surveillance is real, and how much is bluff. We had six people turn out, which was pretty good for only our third action, and at 10 o'clock on a Sunday night. After a planning discussion over tea and coffee, we started out at the state library and shone several very bright torches into every camera we saw between there and Russell Square at the other end of the nightclub strip. The area was fairly busy, but not nearly a busy as on Fridays and Saturdays. After we had shone the torches into the lenses of the cameras, people held mirrors up to the ones we could reach. After that people held up signs saying 'Paranoia', 'Who are you looking at?' and 'Is anyone watching?' etc. Including the cameras inside ATMs, we did about thirty cameras, and we also spotlit the signs that said 'This area under constant video surveillance.'

"At the City of Perth car park under the library a security guard in the booth objected to what we were doing and told us to leave. She told me not to interfere with the equipment when I was shining my torch into their camera from the street. She then said that we were NOT being taped. She was also upset about the mirror held up by someone else in front of another camera. But, anyway, after that, we attracted no official attention at all. We discovered that the official cameras do NOT swivel. Indeed, not a single camera in a dome moved the entire time we were doing the action. Most of them seemed to be completely fixed and unmoveable. This leads me to believe that part of what we had debated is also true. At many times, there IS NO surveillance. A couple eating outside a restaurant asked us about this. It seems to be true that the surveillance actually puts people in danger. If you were sitting in James Street at 11pm on a Sunday night, under a sign that says 'This area under constant video surveillance' you would probably feel safe. Except that the sign is a lie. NO ONE WAS WATCHING. The restaurateur also felt that she was made safe by the cameras, and was convinced that the only reason that we hadn't attracted attention was that the police had already seen our previous actions. Quite why the Saturday lunchtime shift would be working on Sunday night, wasn't explained. The funniest part of the first part of our action was spotting a camera in a car park entrance that was protecting a Coca Cola vending machine.

"We then moved into Phase 2. Two members of our group dressed as homeless people and TRIED to draw attention to themselves, while the rest of us watched and videoed from the other side of the road. There was NO official response. Just as we were discussing whether to do anything else for the night, a real disturbance happened on William Street, when a drunk young man tried to start a fight. He kept trying to start this fight for about 5 minutes, including calling the guy he was picking, a poofter, and abusing his three mates for letting him run away. He even exposed himself to prove that he was a real man and the man who ran away was a poofter. Eventually one of the mates of the guy being picked on pushed the aggro guy to the ground and the four just all walked away. This happened right under a couple of cameras. Shortly afterwards, as we had decided to pack up, a police van drove past, and the cops clearly didn't know aything about the real disturbance, nor about our actions, as they drove past without even looking at the footpaths. WE WERE NOT BEING WATCHED." 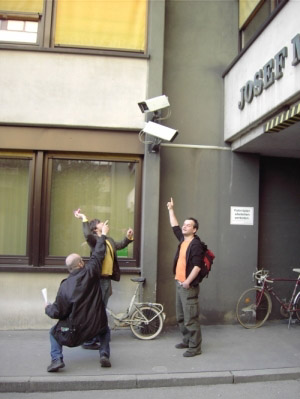 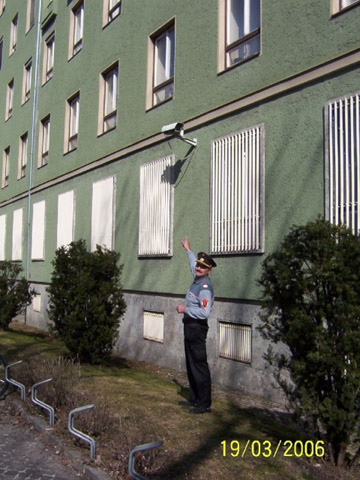 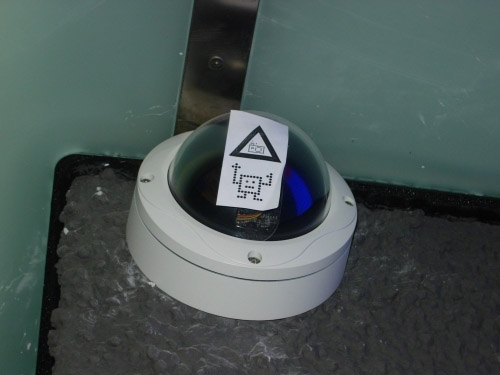 Steffen says: "Seven teams or a total of about 40 people spent the afternoon strolling through the city, searching for, photographing and mapping the locations of surveillance cameras. In total, 275 cameras were located. We also took pictures of ourselves, several by-standers and even a cop standing in front of them. Soon we will publish a 'Spy Map' of Innsbruck as well as our collection of photographs." 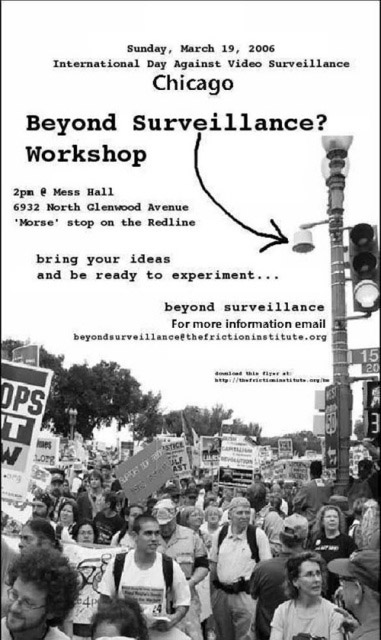 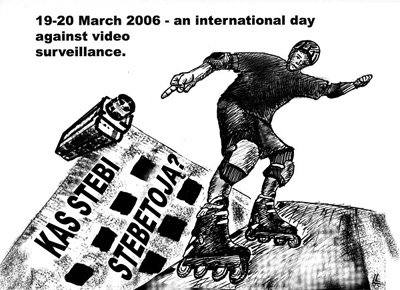 Sunday 19 March 2006: camera-counting tour in the center of Vilnius (Lithuania). Sponsored by the Vilnius Rollerskaters. Translation: "Who watches the watchers?" 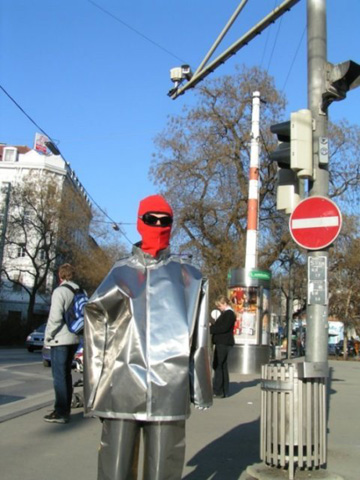 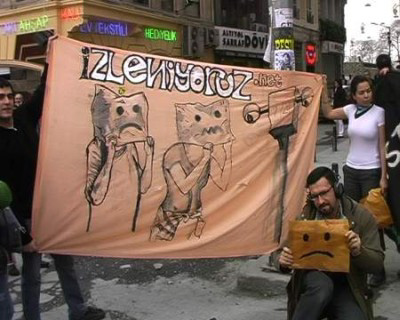 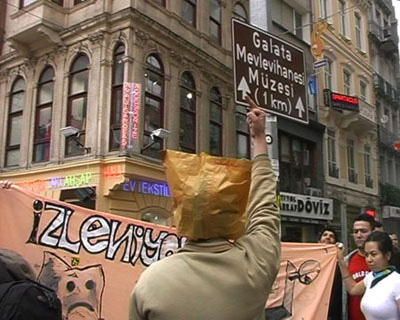 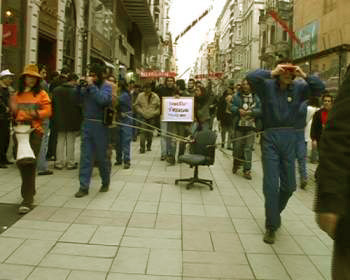 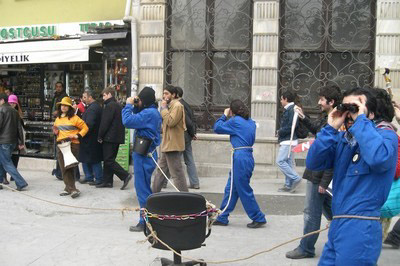 HaKaN says: "At 2:02 pm, the members of Nobese started to perform in front of a surveillance camera on Istiklal Street, the most crowded street in Istanbul. First we tied a necktie, with an 'evil eye' on it, around the camera. Then we attached four people to an empty business-style chair, which was situated in the middle. It symbolized Power and Authority; if no one pulled the ropes, Authority would lose its function and not be able to rule anymore. We handed out fliers with an 'evil eye' sticker on each and we also played musical instruments. Eventually, we walked to the Galatasary, with a lot of people watching us. We didn't go to where we had announced we were going to go, which drove the cops crazy. In classic Nobese style, we took pictures of ourselves in front of the surveillance cameras. The cops started to shout at us to stop. One of the performers gave the camera the finger, which got him detained by the cops, who claimed that he had 'insulted several citizens.' Someone who we suspected of being a cop attacked our banner; another one manhandled one of the performers and told us that we should never undertake a performance like this again. It goes without saying we also took a lot of verbal abuse from the cops. Of course, the NOBESE players will continue their actions." 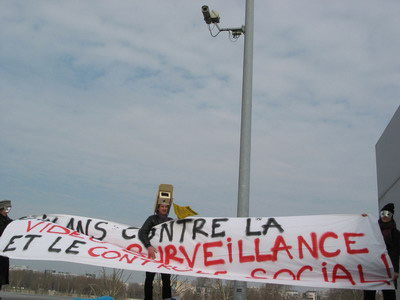 Sunday 19 2006: "At this moment, there is a great social mobilisation [of students and workers] in France. And so, we have simply decided to make [...] a short, photographed performance in front a surveillance camera, so as to show we are always at your side and that the combat continues." -- translation of message from Jean-Pierre, "Smile! You are Being Filmed," dated 18 March 2006. 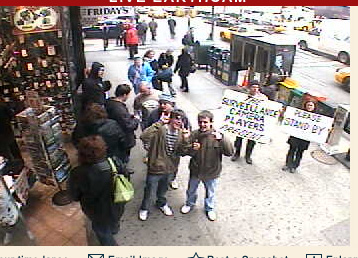 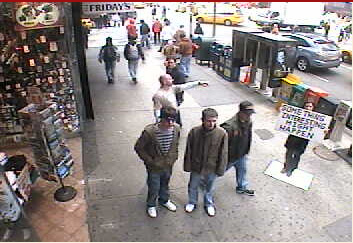 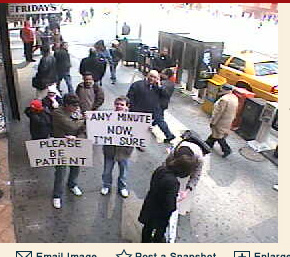 Monday 20 March 2006: performance in front of a webcam installed in the heart of Times Square (New York City, USA). Sponsored by the Surveillance Camera Players. Click here for their description of their performance. Click here to download a Quicktime clip of the end of the performance. 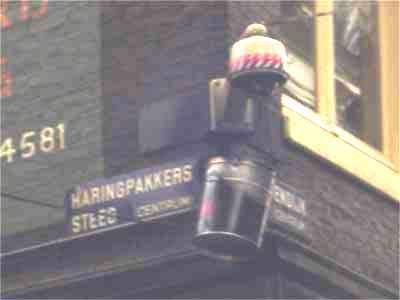 Monday 20 March 2006: "Camera burned in amsterdam on international day of action against cameras," reported by "eyes closed" and published on the Holland Independent Media Center: "Early this morning a electric eye of the police was blinded. Although only one camera out of many was burned we hope to send a clear message to the police, politicians, and right wing nuts who support the use of cameras that we will not tolerate the expansion of mechanisms of control in this case police power. We also want to communicate to everyone that our burning of one camera may seem to many a pointless act of destruction but actually we think that direct actions like this one are more effective than a pettion or a vote for another party. To us the little steps taken by power to expand its realm of control are the most dangerous ones because they often go unnoticed and with little protest so we ask everyone to think about and take action against all those little steps that have recently been taken by government and big business ( i.e. preventative searches, camera toezicht, inncrease in security and politie, ID plicht, licht controles) to expand their control and power over people."