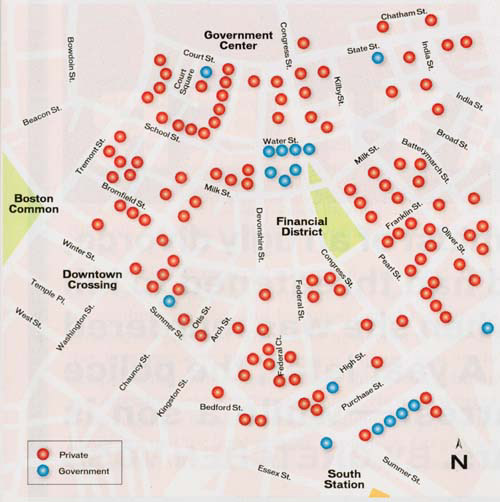 [...] Two years to the month after the September 11 terrorist attacks, surveillance cameras are everywhere, from predictable places like ATMs, airports, and parking garages, to church plazas, office buildings, supermarkets, and highways. Cameras are watching fans at the FleetCenter, students at Harvard, workers in their offices, drivers on Route 128. When the Big Dig is complete, there will be 400 video cameras along the Central Artery; nearly half of them are already in place. That's not including the more than 228 cameras in the Massachusetts Turnpike Authority's Fast Lane booths, or the 50 that the Massachusetts Highway Department has installed throughout the state. Massport has some 400 cameras, most of them at Logan Airport. There are 17 positioned in and around the city by the Boston Transportation Department -- 15 at intersections and 2 on the roof of City Hall. The MBTA has 77 cameras and is installing more in subway and commuter rail stations. Next year, the T will activate six designated "hubs" where images from cameras throughout the MBTA's more than 60 stations will be monitored.

But public agencies have been downright sluggish in installing cameras compared to the private sector. There are at least 128 surveillance cameras in Boston's tightly packed Financial District, according to a survey by a privacy advocacy organization. Of those, 110 are on private property, 10 on government buildings, 6 in highly elevated positions, and 2 on street poles. This may be a vast underestimate. No one knows how many cameras there really are, just as no one keeps tabs on where they are or how they're used. "Nobody is making this information available so you can can be informed about it to agree or not agree," says Bill Brown, founder of the New York Surveillance Camera Players, the advocacy group that counted up [and mapped out] the cameras downtown -- and which stages a form of protest by enacting skits in front of them. "In fact, [Brown says] it seems the only efforts taken these days are to make it not available." [...]

(Written by Welling Savo and published in the September 2003 issue [Volume 41, Number 9] of Boston.)