what about the children?

like their parents, they need to grow up someday 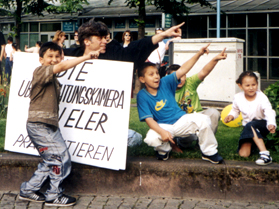 (Bill Brown with children at anti-surveillance action in Mannheim, Germany, May 2002.)


In response to the publication in her local newspaper of an Associated Press article on the weekly walking tours offered by the New York Surveillance Camera Players, a woman from Winston-Salem (North Carloina) named Stacy Bender wrote the following letter to the editor.

I wanted to respond to the Aug. 19 article "Someone's Watching." New Yorker Bill Brown, who leads "tours" of publicly placed surveillance cameras, apparently has not had a family member who was nor himself been a victim of a violent crime. I believe in our Constitution, and I believe in our freedom.

Cameras on our street corners are the least of my worries. Cameras that are placed there by law enforcement could make someone think twice before committing a crime. All I'm hearing about lately are stories of young children being kidnapped and brutally murdered. Does Brown have a 7-year-old? I do.

Those cameras could help in a situation where a child is being kidnapped and police could remedy the situation with the help of those cameras before the situation became fatal. And besides, what have you got to worry about as long as you are not the one on the corner selling drugs to children? Think about it.

I would be upset about the camera issue if they [sic] were coming into my home and putting them in my bathroom or my bedroom. That would be an invasion of privacy.

Bill Brown responds: OK, Ms. Bender, since you're so keen on it, let's talk about your 7-year-old child. Frankly, I'm concerned about his/her education, which of course starts at home. I hope he or she is enrolled in a good school, because your child has a mother who -- at least when it comes to the subject at hand (the indiscriminate and continuous video surveillance of public places by anonymous security guards and police officers) -- isn't very well informed, hasn't thought the matter through, and thus makes mistakes that could be easily avoided.

For example, your child's mother incorrectly assumes that personal experience with violent crime is a reliable indicator of or basis for someone's opinions concerning the subject of video surveillance. She doesn't seem to realize that there are plenty of people who have been the victims of violent crime and are still against video surveillance. Bill Brown happens to be one of them. Like the others, he has realized that surveillance cameras could (in theory or a child's fantasyland) "make someone think twice before committing a crime," but actually do not. Potential criminals either don't know about the cameras' existence in the first place (because these cameras are unlabeled and intentionally designed to be confused with streetlamps or ornaments) and thus -- without even "thinking once" -- commit crimes anyway; or potential criminals know all about the cameras' existence and either adopt "advanced" methods of concealment or simply move to places where there aren't any cameras, thus displacing the problem, not solving it.

Finally, your child's mother incorrectly assumes that children -- or rather their parents -- are special people and so require or demand special consideration. What about the children? is a popular and very cynical rhetorical question among some self-avowed adults who use the vulnerability of children as a way of discouraging or preventing certain facts or questions deemed "embarrassing" (to the adults, mind you) from coming up or being taken seriously. Well, what about the damn children?

Our children are vulnerable, it is true, and they deserve and need to be protected. But the simple fact of the matter is that a high-powered and potentially very invasive video surveillance camera installed in a public place and operated by an anonymous "authority" is far more likely to be used to violate our children's privacy for prurient reasons than it is to protect their safety.