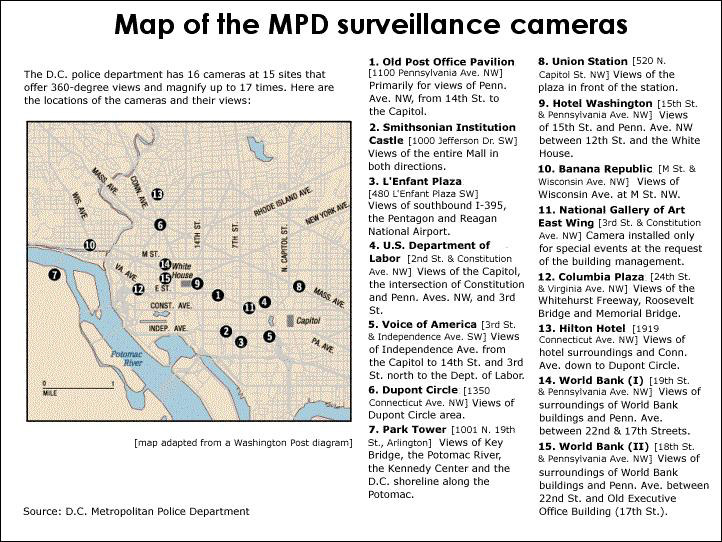 The Metropolitan Police Department ("MPD") of the District of Columbia operates a network of 14 strategically placed surveillance cameras in Washington, DC. Installed in April 2002, this network of cameras isn't to be confused with the one installed by the United States Park Police at approximately the same time. (Both networks were reviewed by the General Accounting Office in June 2003.)

Unlike virtually every other police-operated video surveillance system in America, the MPD system has very clear legal authority: the provisions of the "Metropolitan Police Department Video Surveillance Regulations Emergency Act," passed in March 2002; and Metropolitan Police Department Use of Closed Circuit Television, which is Chapter 25, Title 24 of the District of Columbia Municipal Regulations (Public Space and Safety), drafted 13 June 2002, adopted August 2002. Such explicit authority was only necessary because of the peculiar legal/constitutional status of the District of Columbia.

Like the atrocious policy statement written by and for the Park Police, the DC law keeps referring to "closed-circuit television," as if there's no such thing as open-circuit television (OCTV). But the DC law's own definition of closed-circuit television -- i.e., "Any live video link that is electronically received into the SOCC" (which stands for "Synchronized Operations Command Complex") -- is wide enough to encompass OCTV as well as CCTV. "Video links" can be established with both wireless as well as "traditional" hard-wired cameras, which, incidentally, is a word strangely missing from the DC law's definition. 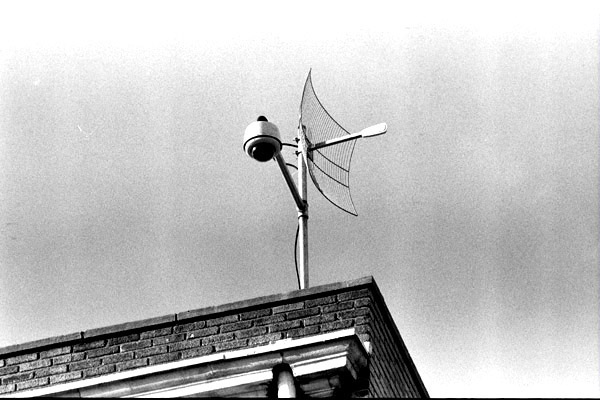 As a matter of fact, when the DC law says that the MPD is "authorized to enter into agreements with public and private entities to access their external video feeds," it can only be talking about using wireless technology to "open up" otherwise "closed" video systems. Otherwise, there'd be thousands of cables stretched above and across the entire city, providing the necessary physical connections between the SOCC (also known as the Joint Operations Command Center) and what the DC law calls the "other sources" of "external video links." These "other sources" include the local Department of Transportation, the DC Public School System, and "law enforcement agencies," including the Secret Service, the FBI and the United States Park Police.

Note well that each one of these "external sources" uses a surveillance system in which several hundred cameras are involved. And so, despite the apparently modest number of "internal" video sources that the MPD has installed ("only" 14 cameras), the SOCC receives video from almost a thousand different cameras. Simply stated, the SOCC is the center of video surveillance in the District of Columbia. According to the GAO report, SOCC personnel "may include staff from other federal, regional, state and local law enforcement agencies during joint operations." During such "emergencies" as large demonstrations against the World Bank, the staff at the SOCC has been widened to include US military personnel.

It's possible that the SOCC is the also a center for audio surveillance in the DC area. Note this stand-alone provision of the DC law: "MPD shall not use audio in conjunction with the CCTV unless appropriate court orders are obtained." This clearly implies that the MPD's surveillance cameras are equipped with microphones, which are supposedly only turned on when "appropriate court orders are obtained." But this is the only reference to microphones in the entire document. Why not directly state the presence of microphones, instead of implying it? And if the cameras aren't equipped with microphones, why did the law mention "audio" in the first place? What, exactly, does "in conjunction with" mean?

Ironically, the centralization of the system in the SOCC decreases the likelihood that the system's "objectives" can ever be accomplished. All these "Little Brothers" -- the security division of the DOT, the subway police, and high-school administrators -- have very different objectives, in each case depending on the respective services they provide. And make no mistake: except for fine-sounding, empty words like "safety" and "security," these Little Brothers provide services that have nothing in common. Only an idiot or a despot uses a single regime to police children, tourists, political demonstrators, automobile traffic, and subway trains.

Significantly, the DC law makes not one, but three different references to the system's objectives: 1) "The objectives of the CCTV program are to prevent crime and provide increased security and public safety," 2) "CCTV systems are intended to augment [the police's] efforts to prevent crime and fear of crime in the District of Columbia," and 3) "Video images are actively monitored for crime detection and observation, evidence of crime or criminal activity, and traffic coordination." Numbers 1 and 3 are clearly odds with each other. Is the objective "preventing crime" or gathering "evidence of crime"? It can't be both. In a ghastly instance of irony, the precondition for the system to satisfy its secondary objective is its failure to satisfy its primary objective. In other words, evidence-gathering is only necessary if a crime takes place, but this is exactly what the system was designed to prevent.

There's more. Number 2 is at odds with itself and with Number 1. Is the objective "preventing crime" or calming the "fear of crime"? It can't be both. While the former aims at stopping activity by criminals (small numbers of people, a "minority" of the population), the latter aims at something very different, i.e., changing the perceptions of potential crime-victims (large numbers of people, a "majority"). And, finally, Number 3 introduces an objective that has nothing to do with crime or manipulating the public's perception of it: "traffic coordination." Not the prosecution of traffic violators, mind you, but the simple "coordination" of law-abiding drivers. And where's the probable cause for that? Nowhere.

The DC law makes no provisions at all for the credentials an officer must possess to be assigned to the SOCC; for the process by which potential watchers are screened; or for the training watchers go through before they are able to take their posts. All it really says on the subject is this: "All operators of the CCTV systems shall sign a certification that they have read and understand the CCTV regulations and acknowledge the potential criminal and/or administrative sanctions for unauthorized use or misuse of the CCTV systems" (emphasis added). To be fair, all operators must read (or at least pretend to have read) the following:

Operators of the CCTV systems shall not target/observe individuals solely because of their race, gender, ethnicity, sexual orientation, disability or other classifications protected by law. CCTV Systems shall be used to observe locations that are in public view and where there is no reasonable expectation of privacy. CCTV will not focus on hand bills, fliers, etc., being distributed or carried pursuant to First Amendment rights. Anyone who engages in the unauthorized use or misuse of CCTV systems may be subject to criminal prosecution and/or administrative sanctions, including termination.

Nice words! But merely glancing over them, even signing your name under them, doesn't mean that you understand how they apply to you; it doesn't mean that "potential" sanctions will actually be imposed if the rules are broken. In any event, reading and signing a policy statement -- especially one as incomplete as this one -- is no replacement for training.

Intellectual honesty compels us to report that the DC law does have one good feature: it insists on the presence of signs, on their importance in helping the cameras "prevent crime." The DC law mandates that the "MPD will post and maintain signage indicating the [general] presence of CCTV systems in the District of Columbia [...] If [surveillance cameras are] utilized in residential or commercial areas, MPD also will post signage indicating the presence of CCTV systems in those [specific] areas with the exception of those [systems that are] deployed pursuant to a court order." Signs are also mandated in Baltimore and Boston, but not in Chicago and New York.