in the grand scheme of things

Even NYCLU [New York Civil Liberties Union] staff acknowledge, however, that the voyeuristic thrill of surveillance is stronger than the public's sense of alarm. "People know if they go into a changing room at Macy's there's a surveillance camera there. In the grand scheme of things, if a person's facing a whole range of problems, is public surveillance going to rank right up there? No. I think in the end, people say to themselves 'They do surveillance all over. As long as they don't look in our apartments, it's ok.'" -- Jerome Chou, 10 July 2000, Gotham Gazette.

The Illinois chapter of the American Civil Liberties Union says it has no reason to challenge police placement of surveillance cameras on light poles throughout the city. ACLU spokesman Ed Yohnka says there's no expectation of privacy in public spaces and so the ACLU can't bring a privacy action against the City or the Police. Yohnka says only if the camera is used to peer into cars or homes without a search warrant, or to peer into bedrooms for personal amusement, would there be a cause of action against what the city calls Operation Disruption. But he urged citizens to be aware of possible abuses of the cameras which police plan to have in operation soon. -- John Cody, 10 July 2003, WBBM Newsradio 780.

In the relatively narrow fields of privacy rights and data protection (not to mention "in the grand scheme of things"), the use of surveillance cameras in public places isn't considered very important or "a serious risk." But it isn't just the cowardly ACLU that feels this way. So do the editors of Privacy & Human Rights: An International Survey of Privacy Laws and Developments, which was published in 2002 by the Electronic Privacy Information Center in assocuation with Privacy International. Among the "Threats to Privacy" identified in this book, "video surveillance" rates rather low: it is mentioned fourth (after "identity systems," "surveillance of communications" and "audio bugging"). Perhaps more importantly, the subject only receives 3 pages' of discussion, while the discussions of other threats are far more substantial: "workplace privacy" warrants 7 pages, "electronic commerce" 8 pages, "genetic privacy" 10 pages and "surveillance of communications" 23 pages. Look within these catagories and you find the "real" threats to privacy: computerized databases of personal information (including DNA samples); on-line commercial transactions; and employers and their "private" security measures.

Why is the video surveillance of public places considered such a low priority? Many reasons no doubt. Here's a good one: capitalism teaches its subjects to ignore or exploit public property, and to respect and protect private property. And so, in a capitalist society such as ours, video surveillance is only deemed an issue if it takes places "in private" (in the workplace or in "the home"). Another reason: religion teaches its disciples to doubt or denigrate "mere" appearances, nature, "the ways of the flesh," etc etc, and to believe in and respect "the essence" of things, God, the soul, etc etc. And so video surveillance isn't a serious threat because it concerns "mere" appearances and the outside of the body, and isn't "invasive" simply because it is (thought to be) "superficial," something that stops at the skin. (As a matter of fact, specially designed surveillance cameras can use X-rays, thermographic film or infrared sensors to see right through and/or into the recesses of the human body -- and without ever puncturing the skin.)

Whatever the reasons for creating it, this hierarchy of threats to privacy -- at the top: computerized databases, on-line commercial transactions, and employers' security measures; in the middle: identity theft, and audio surveillance/telephone monitoring, and at the bottom: video cameras -- ignores the basic (and weirdly obvious) facts that "the power of sight" is a power that can be wielded and that our society is in fact uniquely preoccupied, even obsessed, with the visual image and with rendering everything in the form of a visual image. For example: there are now surveillance cameras that make visible and record whole categories of phenomena that were previously invisible, such as smells (smoke), aroma-less particles, and concentrations (or absences) of heat (both on the outsides and insides of bodies).

To take account of these facts, one need not dispense with the hierarchy of threats to privacy (the image of the pyramid), but reverse the positioning of its contents. Like this: at the top, video surveillance; in the middle, identity theft and audio surveillance/telephone monitoring; and, at the bottom, computerized databases, on-line commercial transactions, and employers' security measures. 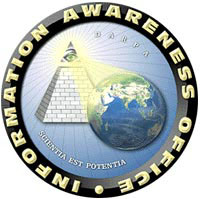 (The Great Seal of the United States, as it appears in the logo for the Defense Department's "Total Information Awareness" Domestic Spy Program, February 2002.)


Especially if one imagines that "video surveillance" is represented by a gigantic "all-seeing" eye, such as one sees atop the pyramid in the Great Seal of the United States (an easy thing to imagine), this new pyramid sets several things straight:

1. It echoes the facts that the word "surveillance" literally means an over-looking or a looking from above, and that most public surveillance cameras are in fact installed above the people they are designed to watch.

2. It reminds us that, if and when there is a digital file on everyone, each file will be both represented by and accessible ("clickable") through a small, high-quality picture (a picture of each face or the retina in a single eyeball). That is to say, such a picture will be both a part of each file, and will figure as the icon or logo of the file that contains it.

3. It provides us with a way of precisely ordering the material within in the pyramid (always a problem with heuristics of this kind). Towards the top of the pyramid goes the rest of the photographs, which can be taken from sources such as criminal records, driver's licenses, newspaper articles, and high-school yearbooks. In the middle goes the information that isn't really visual but can be expressed as images (medical histories and conditions, descriptions of distinguishing marks or other physical features, and measurements of the body and its parts [so-called biometrics]). At the bottom of the pyramid goes all the information that cannot be expressed visually (bank records, credit histories, tax returns and other financial data).

4. It reminds us of the relative amounts of data involved. Pictures go at the top because they can be scarce (note the large number of fugitive Iraqis for whom the US military has produced names but no photographs), and because one needs only a few of them (indeed, if it is good enough, a single photograph will do quite nicely). Financial data goes at the bottom because there is so much of it and because so much of it is garbage. Ironically, the practice of searching through all this shit, looking for meaningful patterns (evidence of criminal or terrorist activity) ("data mining"), creates the need for even more shit to search through. To make the search worth it, one wants to search through as much shit as possible. If new shit has in fact been added since the last search, then one must search through the whole thing, yet again. If and when one finally finds "something," one will need even more data (and yet another search) so that the existence of this pattern can be confirmed.

5. It reminds us that "the society of the spectacle" (represented by the All-Seeing Eye) has its basis in economics, in capitalism, not in entertainment or the media.