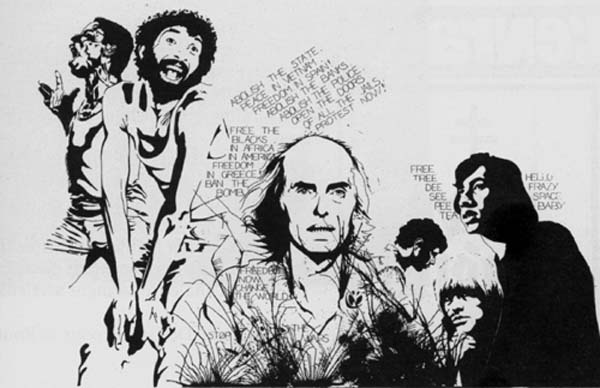 [Twenty years after the 1968 revolts, one may see] The technocratic society consolidating its power. The major interest, comrade Roszak points out, of those who lavishly finance research is weapons, techniques of social control. Control: the spirit flags under the eerie devices, surveillance, internal espionage: no government trusts its people. -- Julian Beck, The Life of the Theatre.

Completely distrustful of all government. -- Motto of the Surveillance Camera Players.

On two occasions (9 August 2000 and 16 August 2000) the Surveillance Camera Players performed in an informal collaboration with the Living Theatre, that is to say, with the group's current incarnation. Founded in the 1940s by Julian Beck, the Living Theatre became (in)famous in the 1960s and '70s, when both its politics and its performances were extreme. When Julian Beck died in 1986, the group was kept alive by his long-time companion and collaborator Judith Malina. Though there's been a dramatic weakening of the group's fierce pacifist-anarchist politics (its demands upon both its audiences and society as a whole), the Living Theatre still answers (most of) what Beck himself once called "the imperatives of contemporary theatre."

Writing in 1971, Beck enumerated seven of them (cf. "The Seven Imperatives of Contemperary Theatre," in The Life of the Theatre: The Relation of the Artist to the Struggle of the People, originally published in 1972 and reprinted with a new foreward by Judith Malina in 1986).

1. In the Street: outside of the cultural and economic limitations of institutionalized theatre.

The Living Theatre's performances of Not in my name are "truly contemporary" because they are offered free, out on the streets of Times Square, with a high degree of political awareness (the play argues against the death penalty and is performed on the days that executions are carried out), and by both women and men. But the performances that the Living Theatre stages (for money) inside the confines of The Theatre of the New City (on First Avenue in Manhattan) are not. They remain traditional or are only superficially "contemporary."

As for the Surveillance Camera Players (SCP), all of the group's performances are staged outside, in the streets, for free, by both women and men, and with (one hopes) a high decree of political awareness, especially in the performances of Wilhelm Reich's Mass Psychology of Fascism. But the SCP fails to live up to two of Julian Beck's seven imperatives (numbers 3 and 4). Perhaps not coincidentally, these same two imperatives are also not met by any of the performances of the Living Theatre. Though each troupe is open to new members (even unrehearsed amateurs who have spontaneously decided to join the performance simply because they have happened upon it), both the SCP and the Living Theatre nevertheless are "closed" to the extent they must prepare in advance for their performances and/or depend upon already-written scripts that merely include a few moments of relatively restricted "collective improvisation," but are never directed by it.

One notes that Chicago's excellent feminist group The Pink Bloque is also "truly contemporary" according to Beck, but in only 5 of 7 imperatives, and that the Pink Bloquers fail to answer the same two imperatives that cause so much trouble for both the SCP and the Living Theatre: i.e., imperatives 3 and 4. The Pink Bloque dress all in pink, hand out sophisticated flyers and (for free) dance to popular songs at political protests and demonstrations. People can certainly join the dancing, even if they aren't female, dressed all in pink or acquainted with the dance-steps. But, once again, the "collective improvisation" is quite restricted and whatever "spontaneity" there is, is nice but not necessary or required for "the show to go on."

And so this phenomenon is clearly one that calls for further study.