Surveillance cameras in public places:
Let the backlash against them begin! 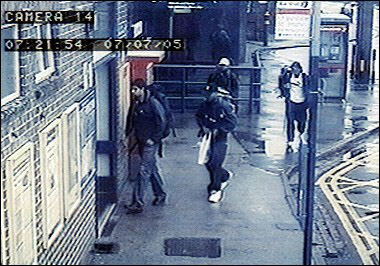 (A completely useless surveillance photograph of the alleged attackers.)

For years, we have been pointing out the obvious: despite the sales pitch, surveillance cameras installed in public places do not prevent or "deter" criminal activity or terrorism. If they are useful for anything -- that is, anything other than racial profiling, sexual voyeurism, harassment of political dissidents, reinforcing conformism, et al. -- surveillance cameras provide sometimes clear, sometimes blurry pictures of the crime after it is too late to do anything about it. On 13 September 2001, we made this simple point with respect to the attacks on the World Trade Center; and on 9 May 2005, we made this point with respect to the still unsolved bombing of the British Consulate.

But these events took place in New York City, which has comparably few surveillance cameras operated by the police ("only" 5,000 or so). And so our point could easily be dismissed. With the bombing of four locations on 7 July 2005 in London, which is commonly known one of the most heavily surveilled cities in the world, the unfortunate accuracy of our assertion was once again demonstrated: despite the presence of approximately 500,000 surveillance cameras in that city, most of them installed in the wake of the IRA bombings of the early 1990s, four completely undeterred terrorists set off bombs that killed over 50 people and wounded 700 more. The Emperor is wearing no clothes and now a lot of people see his nakedness.

"These cameras are pigs in the poke. They do not prevent crime," said Johnny Barnes, executive director of the DC branch of the American Civil Liberties Union. "The point is, does it make sense to spend 20 per cent of your [security] budget, as they did in London, that didn't help those poor souls . . . that died. When measured against this tremendous invasion of privacy, it just isn't worth it in our view."

"I don't think it [the presence of surveillance cameras] really matters," said Christa Faern, a DC commuter who travels by rail every day to work. "[The terrorists are] just going to find a way around it anyway."

Security experts say that technology hasn't yet caught up with hopes for the equipment, however. They point out that despite London's huge network of cameras, the bombings weren't prevented. In those two cases, the cameras have only helped in the investigations. One significant weakness is that the images caught by camera can't automatically link to a list of known terrorist suspects -- not that that would have helped in London, as men identified as bombers weren't on any watch lists.

"I haven't heard of anything being successful that allows us to prevent something by flashing up on a screen somewhere a positive identification of someone on a terrorist database," said Jack Lichtenstein with ASIS International, a Washington-based organization of security officials. Still, "that's where we're headed," he said.

Privacy advocates say the London bombings should persuade policymakers to stay away from surveillance rather than invest in it. It doesn't prevent terrorism, and at best only encourages terrorists to shift their target, they argue.

"Let's say we put cameras on all the subways in New York City, and terrorists bomb movie theaters instead. Then it's a total waste of money," said Bruce Schneier, author of Beyond Fear: Thinking Sensibly about Security in an Uncertain World.

From The Australian Broadcasting Corporation, 24 July 2005:

Federal Opposition Leader Kim Beazley says surveillance cameras will not help to stop a terrorist attack in Australia, and more needs to be done to improve aviation, maritime and railway security [...] "It's very good at giving police an opportunity to trace things after an attack has occurred, and it's to be welcomed for that," he said. "But the point is to the stop the attack happening."

Let's remember that London is the most heavily monitored city in the world, with surveillance cameras recording virtually all public activity in the city center. British police officials are not hampered by our 4th amendment nor our numerous due process requirements. In other words, they can act without any constitutional restrictions, just as supporters of the Patriot Act want our own police to act. Despite this they were not able to prevent the bombings, proving that even a wholesale surveillance society cannot be made completely safe against determined terrorists. Congress misses the irony entirely. The London bombings don't prove the need for the Patriot Act, they prove the folly of it.

From another report the Australian Broadcasting Company, 26 July 2005:

Barrister Jennifer Saunders doubts their value. "It may assist later in collection of evidence but I don't see how it assists in advance in preventing anything," she said.

From Arnold Kling, a columnist at Tech Central Station, 29 July 2005:

The ability to recreate a terrorist incident after the fact does not excite me. It would do nothing to deter a suicide terrorist. My guess is that it does little to deter even terrorists who want to live afterward -- they know they are playing a high-risk game.

As a prevention tool, security cameras are of questionable value. Do human beings have to monitor the cameras 24/7? At best, cameras can use face-recognition technology to issue some sort of alert, such as, "there's a chap on our watch list, about to board the subway." Is such information timely and actionable?

It seems to me that it would make more sense to invest in a network of sensors that detects explosive devices than a network of cameras. A sensor that tries to detect explosives is less of a threat to privacy than a video camera. And a positive reading from such a sensor would be a lot more actionable.

And yet what do we hear coming from our police chiefs and politicians? Calls for even more cameras. We say no: this is irrational. If we truly want to protect ourselves from terrorists who are murderously enraged with the policies of our government -- with the occupation of Iraq, the occupation of Afghanistan, and/or support for the occupation of the Palestinian territories -- then we should pull "our" troops and support out of these countries immediately.

As for the surveillance cameras and the claims of those who favor them: let the backlash begin! We say: no more new ones; take down the ones already installed.