How to Make Maps of Camera Locations 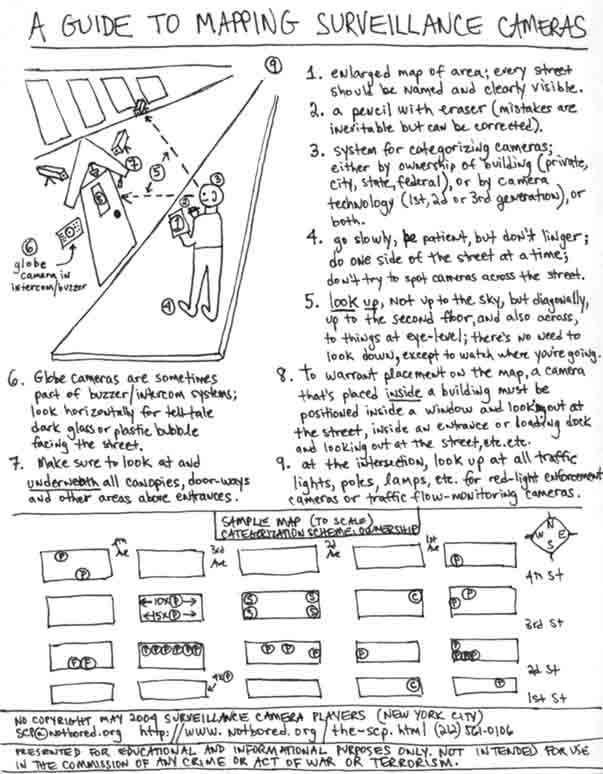 1. Re-familiarize yourself with or find out what surveillance cameras look like.

2. Find a particular neighborhood or district that you want to map out (i.e., one that has a lot of surveillance cameras in it). Don't try to map out a large area or, rather, don't try to map out a large area all at once and all in one map. Make a series of small maps first and then put them together later. Map-making is a very time-comsuming project. Each of the "small" maps made by the New York SCP took at least 9 hours' of work to make.

3. Find a street map of the neighborhood that you've selected. Make sure that the map is "the right size": i.e., that the neighborhood you've selected would be legible and intact if you were to cut it out and paste it on to a standardized (an eight-and-a-half-inch wide and eleven-inch-long) piece of paper. Having the right-size map at the beginning will save you from having to spend a lot of time standing at a photocopier, trying to blow up or shrink down the map so that it looks good when you finally distribute it (see #10 below).

4. Put a piece of very thin ("tracing") paper over the map and then, using a pencil and as accurately as possible, trace out the outlines of the streets in the neighborhood. Using a black pen, go over and darken the penciled-in outlines, label each one of the streets and write the name of the neighborhood in large letters across the top of the page -- all the while without cutting or punching any holes in that thin tracing paper!

5. Make a photocopy of what you completed in step #4. If you don't have access to a photocopier, repeat step #4 on a separate piece of tracing paper. Either way, attach the duplicate to a clip-board or a thick piece of cardboard. Save the original for later (see step #9 below).

6. Walking slowly and glancing quickly at every single part of every single building, doorway, pole, traffic light, etc. etc. that you come upon, look for surveillance cameras installed in public places or watching the public as its members go about their respective affairs. Using a felt-tipped ink pen, mark down the locations of the cameras you've spotted. Don't worry too much about making mistakes: you will have a chance to correct them in step #9 (see below).

7. Though it isn't necessary to do it, you can categorize the cameras you've spotted. There are at least two different schemes of categorization:

[1] You might categorize the cameras in terms of their rotational ability: are they fixed in position? can their position be changed to some degree? or are they mini-cameras hidden inside opaque globes and fully rotational within them? You might mark down on your map "F" when you've found a camera that is fixed in position, "S" when you've found one that can be moved to some extent, and "G" when you've found a globe camera. But if you are going to do this, you should also indicate the precise directions in which the "F" and "S" cameras are pointing (the "G" cameras can point in any direction). This will require drawing skills that you may or may not have. And yet, if you don't specify the directions in which the cameras are pointed, the information you'll be presenting will seem a lot more useful than it really is.

[2] You might categorize the cameras in terms of their presumed ownership: are they owned and operated by the police? by privately employed security guards? or by private individuals? (Ownership can reasonably be deduced from the object on which the camera is installed: if it's installed on a city-owned building or pole or next to a traffic light, then it's a police camera; if it's installed on an office building, then it's a camera watched by private security guards; if it's installed above the entrance to a residential building, then it's owned by individuals or a small group (the building's landlords or tenants). You might mark down on your map "C" when you've found a camera that is owned by the City (police department), "P" when you've found one that's operated by a private company, and "R" when you've found one watching a private residence. But if you are going to do this, you will need to double-check your findings against property records or maps that accurately identify the use(s) to which particular buildings are being put (industrial, commercial, residential, mixed, etc.).

The map-makers at the NYC Surveillance Camera Project use the first [1] method of categorization, while the map-makers in the New York Surveillance Camera Players use the second [2] one. Other methods are certainly possible. If you choose not to use any categorizing scheme, simply mark the location of each camera you've spotted with a "C" or a little circle or whatever suits yer fancy, Nancy.

8. After you've canvassed every street in the neighborhood, do it all again (repeat step #6). Use the same version of the map (the photocopy) you started out with in step #5. This way, you will make sure that you neither missed nor double-counted any cameras and that you didn't make any mistakes as to their precise locations.

9. Using that felt-tipped black pen and writing as neatly as possible, copy over or "transfer" your double-checked findings from the photocopy to the original produced in step #4. Work with the copied-over original from now on. Count up the total number of cameras, and write that number and the phrase "total number of cameras" somewhere on the page. If you categorized the cameras (see step #7), add a legend that explains what each letter stands for, and how many cameras of each category were spotted.

10. Distribute your map any and every way you can: photocopy it and hand it out (perhaps during a walking tour you've organized); send it to yer favorite rag; publish it in yer own zine; scan it and upload it to a website, etc. etc.