MSNBC and the Microwave Monster 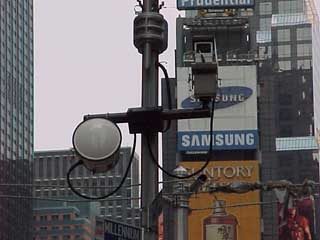 Without intending to do so or realizing what it did, MSNBC (cable television) solved a small but important mystery during the program that it aired between 2:30 pm and 3 pm (EST) on Tuesday, 3 July 2001. Devoted to face recognition software and the use of surveillance cameras in public places, this program -- an awkward mish-mash of live and pre-recorded segments -- included a short interview with Bill Brown of the Surveillance Camera Players that had been taped in Times Square, Manhattan, earlier in the day.

The now-solved mystery was this: who owns and operates the large unlabeled surveillance camera installed right in the heart of Times Square? It's the one installed at the top of a City-owned pole on the north end of the traffic island that lies between 43rd and 44th Streets and between Broadway and Seventh Avenues. (See photograph above.)

In addition to systematically violating people's right to privacy, this surveillance camera is jeopardizing and possibly adversely affecting the health of the tens of thousands of unsuspecting people who either work in the surrounding buildings and/or visit Times Square, the so-called crossroads of the world, as tourists. Unlike most surveillance cameras in New York City, the one in Times Square is outfitted with a large, expensive and very nasty-looking microwave transmitter, which obviously beams the images captured by the camera to an equally large receiver, which is installed high up in a building two blocks away. In the process, the transmitter -- which is continually operating, installed only 25 feet above ground-level and violates federal law to the extent that it doesn't bear a label saying that it has been inspected and approved by the Federal Communications Commission -- regularly pollutes the entire area with microwave radiation.

Who could afford to operate such a monster, which costs around $10,000? Who could operate it on City-owned property? Who would operate it with such complete disregard for federal law and the public health? The New York Police Department, which maintains a police station just one block away? The Department of Defense, which operates a recruiting center at the far end of the traffic island? No one knew.

And so the Microwave Monster has been an important topic of discussion during every single walking tour of surveillance camera locations in Times Square. Indeed, had there been enough time, Bill Brown would have shown the Monster to MSNBC's reporter Monica Novotny when he gave her an abbreviated version of the Times Square walking tour on the morning of Tuesday, 3 July. It would have been very interesting indeed if the MSNBC crew had included shots of the Monster in the collage of Times Square surveillance cameras that opened Novotny's report.

The mystery was solved by the following, perhaps unscripted admission. To provide continuity between an interview with Larry Irving of the Privacy Council and Monica Novotny's interview with Bill Brown, "Rick" at the MSNBC Live news-desk said:

"We're going to talk a little bit more about this. How many surveillance cameras are there in Times Square, for example? Well, you're looking at [sic] one of them right now. It's probably the most famous: NBC's Times Square camera, and that's just one of many."

Despite Rick's obvious mistake -- the viewer wasn't looking at a surveillance camera, but through the lens of one -- it was easy to deduce the location of this "famous" camera by the view of the area it afforded: the exact same location occupied by the Microwave Monster. There can be no doubt; no other camera is positioned to take such a view. The Microwave Monster has nothing whatsoever to do with law enforcement: it isn't owned or operated by the NYPD or the US military, but by NBC.

It is imperative that we get NBC to confirm or deny that it is in fact the owner/operator of the Microwave Monster; NBC must explain how it justifies the use of a dangerous, high-powered microwave transmitter in the heart of Times Square.


Note added 27 February 2002: as part of its efforts to get NBC to reveal whether it is in fact the owner/operator of the Microwave Monster, the Surveillance Camera Players contacted the Federal Communications Commission and the Environmental Protection Agency. Though both agencies assured the SCP that they had no jurisdiction over the microwave transmitter in question, it is clear that one or both agencies contacted NBC, which sometime between July 2001 and today put a multi-colored "NBC-News" sticker on the Monster. But the microwave broadcaster still isn't up to the requirements of federal law, which mandates that any such transmitter must be inspected by the FCC and must have a label upon which is printed the registration number given to the transmitter by the FCC. The Monster still has no such label, making NBC automatically liable for at least $2,000 in fines.