surveillance from the air 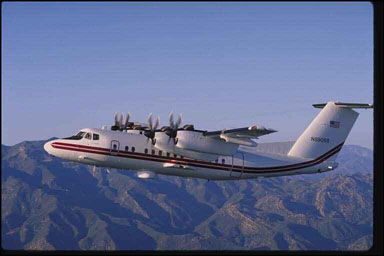 As we've mentioned elsewhere, helicopters have certain drawbacks: they are very noisy; they must fly at relatively low altitudes; they cannot "hide" by achieving high altitudes; they're vulnerable to small arms fire from the ground; and they can't fly long distances or stay aloft for long periods of time without refueling. And so helicopters are increasingly being used alongside a variety of other aircraft, including spy planes. 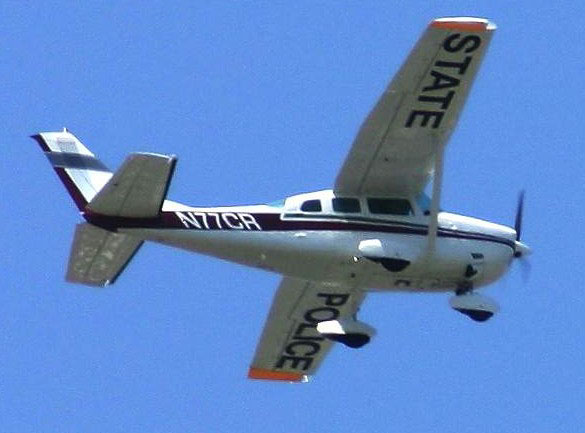 (A spy plane operated by the police of an unknown state.)

Typically, spy planes require a large crew, sometimes as many as 24 people. Pilots, navigators, tactical evaluators, flight engineers, equipment operators, technicians, and mechanics are all necessary personnel. These plans can stay airborne without re-fueling for as long as 12 hours, and can visit "targets" as far away as 3,000 miles. A wide variety of devices, including antennae, receivers, recorders and computers, are used to "gather" (intercept) signals intelligence: who is contacting whom, when, where, for how long, how often, etc etc. Spy planes, especially those that are remote controlled, are also equipped with a wide variety of imaging devices (radar sensors, video cameras and infrared readers). These devices allow the planes to "see" in all conditions, even in total darkness.

To be as undetectable, as sneaky, as possible, spy planes aren't large military jets, but small propeller-driven "private" airplanes (usually Cessnas or De Havillands) that have been packed with military equipment. The motors have been modified so that they can run "silently." As a result, spy planes make virtually no noise, look "perfectly innocent" and are highly unlikely to be detected, even when they fly slowly at low altitudes. (The only dead giveaway is the antennae-laden "radom" on the plane's underside.) 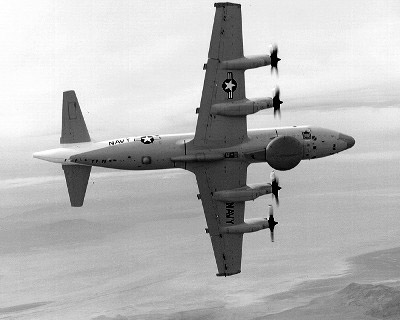 (The "radom" on the underside of a US Navy EP-E3 spy plane.)

Ironically, spy planes are easier to spot at night than during the day. They frequently fly very slowly -- so slowly, in fact, that at times they appear to be motionless. Spy planes don't keep to the easy to spot flight routes maintained by the Federal Aviation Admininstration (FAA) for jet-powered commercial aircraft, and sometimes circle several times around a "pivot" (target) on the ground. The bodies of spy planes are silver or white, and bear few if any identifying or distinguishing markings or insignia. Finally, unlike the lights on commercial airplanes, which are bright and continuously shining, the lights on spy planes are dim and/or red-colored, alternate in irregular patters ("flicker") and sometimes go completely dark, and then light up again, in a matter of seconds.

Spy planes have long been used by so-called intelligence-gathering agencies such as the National Security Agency (NSA) to monitor foreign countries, especially the Soviet Union. But in recent years, especially since September 11th, spy planes are being used to fly reconnaissance missions over the territory of the United States of America. To our knowledge, at least two "authorities" are currently using spy planes for the purpose of "homeland security": the Federal Bureau of Investigation (FBI) and the Department of Defense.

On 15 March 2003, the Associated Press (AP) reported that "the FBI has a fleet of aircraft [...] flying America's skies to track and collect intelligence from suspected terrorists." There are around 100 of these planes, which are nicknamed "Nightstalkers" and can be flown by any of the FBI's 56 field offices. Each spy plane is equipped with what the AP describes as "electronic surveillance equipment so agents can pursue listening devices placed in cars, in buildings and even along streets, or listen to cell phone calls. Still others fly photography missions [using] infrared devices that allow agents to track people and vehicles in the dark."

The AP report went on to explain that, "Legally, no warrants are necessary for the FBI to track cars or people from the air. Law enforcement officials need warrants to search homes or to plant listening devices or monitor cell phone calls -- and that includes when the listener is flying in an airplane [...] A senior FBI official, speaking on condition of anonymity, said the FBI does not do flyovers to listen to telephone calls and gather electronic data from random citizens in hopes the data will provide leads. Rather, the planes are used to follow specific individuals."

In mid-October 2002, the Department of Defense (DOD) used the series of sniper attacks in the Washington, DC area as an opportuntiy to "offer" the use of its spy planes to catch the culprits (one whom, it turned out, had extensive military training). Dispatched from the 204th Military Intelligence Battalion at Fort Bliss, Texas, the DOD's planes are even more sophisticated than those flown by the FBI: each one is equipped with long-range cameras, radar and hyperspectral sensors, Forward Looking Infra-Red (FLIR) imaging devices, on-board computers, target-acquisition and tracking software programs, and microwave transmitters to "downlink" to monitoring stations on the ground.

News reports indicate that the Department of Defense's kindly offer was reluctantly refused. There had been too much criticism of the offer, which clearly violated the spirit, if not the actual letter, of the 1878 Posse Comitatus Act (there must be a strict separation between the military and domestic law enforcement agencies, that is, if democracy is to survive).

Needless to say, the Bush Administration wants to repeal the Posse Comitatas Act, and for the same cynical reasons that the New York Police Department wants to nullify the Handschu Consent Decree: September 11th rendered these internal controls both obsolete and an obstacle to preventing future attacks. And so, without generating any objections at all, the DOD announced in March 2003 (five months after the sniper attacks had ended) that it was deploying Black Hawk helicopters in New York's "airspace." No doubt, DOD (or NSA?) spy planes were also deployed.