Information presented for educational and informational purposes only.
Not intended for use in the commission of any crime or act of war.

How to Spot Them at Public Events

[The police] are always in costume, even when they are in plainclothes. In fact, in plainclothes they are actually playing a role as we understand the term in classic theatre vocabulary: they assume a character other than their own, they disguise themselves, put on the mask, mimic the habits and characteristics [of others], and seek a setting, a background against which they can move in character. -- Julian Beck, "Police Theatre III," 1970 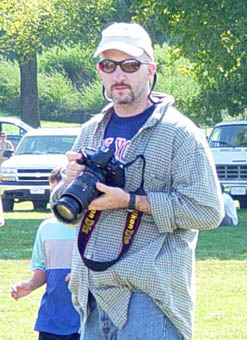 (Unknown actor at a huge demonstration in Washington DC against the IMF/World Bank, April 2002.)


Someone who is playing the role of a professional news photographer or an amateur "shutter bug," but is actually a police officer, soldier or intelligence agent, is relatively easy to spot. What follows are ten simple things to look for.

1.) Actor displays no credentials or even a photo ID, yet he or she seems to be allowed police access to areas from which news photographers and spectators are prohibited.

2.) Actor has a new camera, often digital, with little or no signs of wear. Actor has no second camera body, no case, no flash and minimal acessories. His/her camera strap came with the camera and often has the camera logo on it. (Professional photographers seldom prefer the stock neck strap-opting for more durable padded types, usually black.)

3.) Actor has a large new telephoto lens on his or her camera and seldom has a filter attached. Actor fumbles with lens cap. (Pros typically use a UV filter as a "lens cap," and seldom shoot anything outdoors without a filter. Spies don't want to scratch the lens and so keep it capped when not in use.)

5.) Actor is wearing a hat with a bill. (Pros, again, seldom wear billed hats since they interfere with the ability to shoot vertical angle images.)

6.) Actor is panning an entire crowd, photographing each face in the group. (Pros are there to get the flavor of the event as a whole, and are looking for exciting or representative scenes. He or she doesn't waste film or time trying to get everything and everybody. The Assignement Desk has a lot more for them to do today than shoot every demonstrator.)

7.) Actor has his or her camera set in automatic mode, seldom touching the controls or the focus ring on his or her lens. (The point-and-shoot pinhead with a $4,000 Nikon is a dead giveaway.)

8.) Actor is with another person who seems to be his or her security detail or is acting as a spotter. (News photographers often accompany reporters who carry tape recorders and/or note pads. They will ALWAYS have credentials displayed and will be making contact with the crowds and leaders at a demonstration. The spy's "spotter," by contrast, is watching out for his or her partner, that is, looking for and pointing out "interesting" people to photograph.)

9.) Actor is dressed in a distinctive way - folding knife clipped to front pocket, wallets in both back pockets, shirt over another shirt (even on a warm day), so as to conceal guns, handcuffs, radios etc etc. Actor walks the stage with a swagger, arms somewhat away from his or her body, looking around at every face like a mugger looking for a mark.

10.) Actor does not like being photographed. (Professional photographers could care less who takes their picture. Spies freak out.)