Is McKenzie Wark a Plagiarist?


Below the reader will, perhaps, find three very good reasons to answer, “Yes, McKenzie Wark is a plagiarist, and you’ve caught him red-handed.” The first image shows a screen grab of our translation of the interview that Julian Coupat gave to Le Monde on 25 May 2009. (We have highlighted a single passage in this interview in yellow.) Note that we translated this interview from the French and put it on our website two days later, that is to say on 27 May 2009. Both at the time and today, it is the only English translation of this interview available on-line.

The second image shows a scan of page 144 in Wark’s newest book, The Spectacle of Disintegration: Situationist Passages Out of the 20th Century (Verso Books). We have circled in pencil a single passage that bears an uncanny similarity to our translation. Note well that this passage, as well as two other quotes attributed to Julian Coupat (see below), are not footnoted. Nor is any source given for these quotes, i.e., that they come from Coupat’s interview with Le Monde. This is quite anomalous: every other quotation in Wark’s book is properly referenced.

For the reader’s ease, we have juxtaposed our translation with the passages that appear on p. 144 of Wark’s book.


“Anti-terrorism, contrary to what the term itself insinuates, is not a means of fighting against terrorism, but is the method by which one positively produces the political enemy as terrorist.”


“Anti-terrorism,” Coupat writes, “contrary to what the term insinuates, is not a means of fighting against terrorism, it is the means by which it positively produces the political enemy as terrorist.”


“Unfortunately, I am not the author of The Coming Insurrection, and this whole affair will end up convincing us of the essentially repressive [policiere] character of the author’s function.”


Coupat declares that “unfortunately, I am not the author of The Coming Insurrection, and the whole affair will end up convincing us of the essentially policing role of the author-function.”


“In French memory, one hasn’t seen power become fearful of a book for a very long time.”


He also notes that “In France one can’t remember power becoming so fearful of a book in a long time.”

It is easy to see what Wark seems to have done here. By his own admission, “my French is terrible.”

“I learnt to read French by reading these texts. I just taught myself. And my French is terrible. I make no claims to be a scholar of the language or anything like that whatsoever.” (Interview with Rhizome dated 7 May 2013).

Note as well what Wark says in this same interview.

“One of the reasons I like to teach the SI is that all the texts are free in translation on the Internet. It’s everywhere and done by amateurs, but done lovingly.”

It looks like Wark, knowing full well that plagiarism would not be considered acceptable by Verso Books, changed a single word in each of the three instances (even though it produced bad English, such as the lack of a proper conjunction in the first passage [the repetition of "it is"] and “the essentially policing role of the author-function”), and thus – by way of a technicality – could not be accused and proven to be guilty of plagiarism. But an absence of guilt due to a technicality is not innocence: indeed, the tiny changes it seems that he introduced into our translation only proves his awareness of his guilt.

Why couldn’t he simply have used our translation and given us proper attribution? 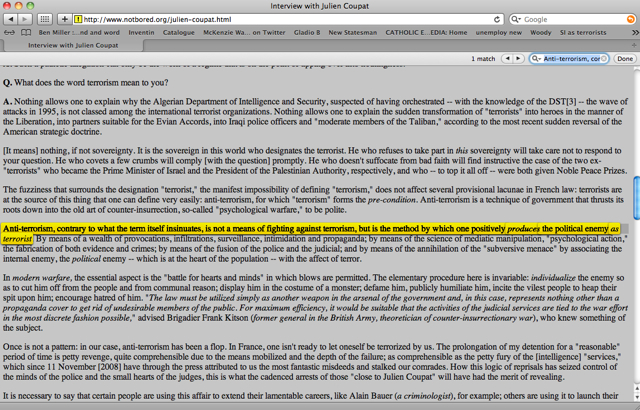 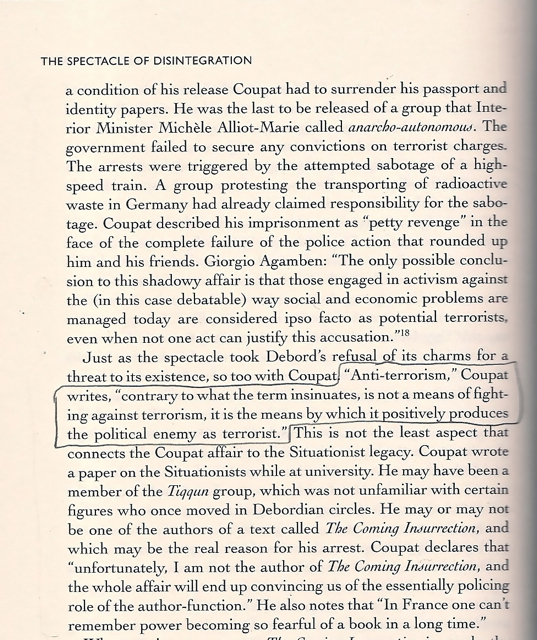