or, victory above all is a victory over all 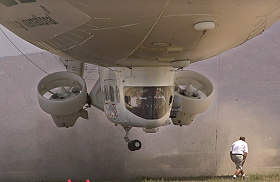 During the recent blackout, millions of New Yorkers became reacquainted with the sky. Not so much during the day, when the sun was out, but at night, when the complete absence of electric lights meant that, perhaps for the first time in their lives, the city folk could clearly see the stars, the millions and billions of stars that are normally overshadowed by the bright lights of the big city. Perhaps these star-struck people also saw a few of the many police helicopters, FBI spy planes, Air Force fighter jets and GPS satellites that were also in the air that night. Perhaps they did see them -- how could you miss 'em? -- but didn't know what they'd seen.

But one thing is certain: despite the absence of electricity, those aircraft certainly saw the wicked traffic jams and the large confused crowds of people milling around or trying to get home. Even in a blackout, people do various tell-tale things -- move their bodies, emit heat, make noise, drive cars, and use their battery-powered "pirate," "ham" and CB radio transmitters -- all of which can easily be detected and tracked by air-borne radar sensors, infrared cameras, high-powered microphones, and electromagnetic interceptors.

Back in the 18th century, the battlefield could only be seen from the ground and so, to quote Kinglake, "had no entirety, no length, no breadth, no depth, no size, no shape and was made up of nothing. In such conditions, each separate gathering went on fighting its own little battle in happy and advantageous ignorance of the general state of action; nay, even very often in ignorance of the fact that any great conflict was raging." Then Napoleon hit upon the idea of placing spies in hot-air balloons. Once moved into position, the balloons could overlook ("surveill") the battlefield and estimate the troop-strengths and dispositions of the enemy's forces. Then they'd have to make the perilous and slow trip back home, to make their reports.

In 2003, the US military announced that it was adding old-style blimps to the long and growing list of aircraft (helicopters, planes, uninhabited aerial vehicles, satellites) that are going to used ensure America's "homeland security" in the coming years. Unlike Napoleon's hot-air balloons, these modern blimps will be equipped with visible-light cameras (capable of seeing and zooming in on small objects from very long distances), color-infrared cameras (allowing the spies to see, even at night, and to see even the smallest "discolorations" during the day), and hyperspectral sensors (allowing them to see through translucent obstacles such as trees or deep waters). The new spies don't need to return home to make their reports. Using on-board computers and digital radio transmitters, they can send their reports back home as electronic messages, which arrive seconds after being sent and, if desired, can already be analyzed and coordinated with other data. These new blimps can also use on-board radios to receive new orders from its continuously updated and thus ever-more "intelligent" commanders.

But the real difference is that today's blimp can carry and discharge truly fearsome weapons. As the attack on Hiroshima showed, a single plane (a blimp with engines) can use a single bomb to destroy an entire city.