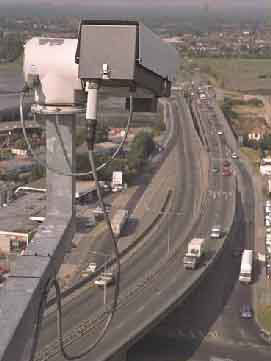 In addition to protecting security along the highways and taking photographs of cars that have run red lights at traffic intersections, surveillance cameras are used by the police and other governmental authorities to monitor such non-criminal phenomena as traffic flows, delays, densities and lines on the nation's roads and highways.

Wireless surveillance cameras installed on poles can be used in place of subterranean, wire-based systems that use magnetic fields to detect the presence of automobiles and then use microwave transmitters to automatically trigger traffic lights or roadside warning-signs. Though over-head video surveillance is almost twice as expensive as the old subterranean systems, the former last longer and can be repaired or replaced more easily.

On occasion, the feeds from such flow-monitoring cameras are made available to the general public via the Internet. (Here, for example, are views from "intelligent transportation systems" in Manhattan, NYC, Maryland and Atlanta, Georgia.) Note well: in September 2003, a traffic flow-monitoring camera in Tuscaloosa, Alabama was misused by police officers for lascivious purposes.