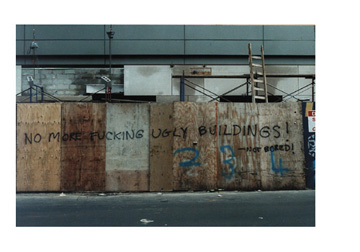 People come to and fall in love with Manhattan because they find here a unique atmosphere, an urban environment unlike any other, one that makes them feel and act differently than if they were anywhere else in the world. The enduring appeal of New York City, the source of what makes Manhattan Island "so New York," is easy to locate: it's the beauty of the buildings, the charm of the streets, both wide and narrow, along which the buildings rise, and the varied ambiances of the neighborhoods, all the Greenwich Villages, China Towns and Little Italys that are crammed onto one huge island. Despite the incredible distances and differences that exist between these areas, a certain fragile unity of atmosphere -- a certain "New Yorkness" -- can be perceived and enjoyed, no matter where you go in Manhattan. It is to the preservation and enrichment of this psychogeographical spirit of New York that we are resolutely dedicated.

Fucking ugly buildings such as the huge United Artists theater complex that is being erected at Broadway and 14th Street are destroying the charm of our city's streets and the ambiances of our city's neighborhoods. We should be fighting against fucking ugly buildings as vigorously as we are fighting against terrorist bombings of the World Trade Center and other city landmarks, for these architectural monstrosities are horrible explosions in reverse, disasters that spring up, rather than fall down. Fucking ugly buildings are the neutron bombs of urban planning: they kill the spirit -- the love of beauty -- of the people who have to experience them day after day, while leaving their bodies intact. Because fucking ugly buildings are the same anywhere you go -- what makes them fucking ugly in the first place is that they all look alike, each one has the same square-headed, blank, glassy-eyed expression -- their construction in Manhattan is destroying its uniqueness, fragmenting its unity, and threatening its very spirit.

We think that it is telling that this particular fucking ugly building will eventually house the city's biggest movie theater complex and a Virgin Records megastore. Why can't the building itself be as creative, interesting and satisfying as the commodities that are sold inside are supposed to be? These commodities (the movie spectaculars, the junk food, the consumer electronics, and the pre-recorded bits of entertainment) will change all the time, but the fucking ugly building will remain there, day in, day out. Why should we be stuck with it? We are the ones who, through our state taxes, are helping to finance its construction. If Union Square needs anything, it needs affordable public housing, which is what was supposed to be constructed, that is, until Antonio Pagan's crew got involved. A huge theater complex such as this one belongs in Times Square (if anywhere), but most definitely not in Union Square, which has traditionally been home to the city's printing presses. We fear for Times Square (which has been invaded, occupied and destroyed by such distinctly un-New York corporations as Disney), but not nearly as much as we fear for Union Square, which has recently suffered the construction of such fucking ugly buildings as the Beth Israel Medical Center and Bradlees Toys, which is what the statue of George Washington, mounted on his horse in Union Square Park, has to look at every day for the rest of his monumental life. Union Square is near death; there is even a TV show named after and set in it. We must do something now.

Rally around the cause of beautiful buildings, lively streets and unified neighborhood ambiances! Enjoy your city for what you can experience and the people you can meet by traveling through and in it, not by what you can buy in it! Join the New York Psychogeographical Association, or, better yet, form your own!

Editor's note: On 9 January 2000, The New York Post published the findings of a panel of archirectural experts who'd been asked to vote on "The City's Ugliest Buildings." Completed in 1999, the fucking ugly building at One Union Square South was a shoo-in. In the words of The Post,

This new high-rise with the bizarre, fog-belching sculpture called "Metronome" on its face is a grotesque modern nightmare, the panel concluded. "Now, one of the great urban vistas -- Park Avenue South, from Grand Central to Union Square -- ends with a building so mediocre, so poorly built, so uninteresting technologically as to make it almost nothing at all," Elliot said. He complained that the building's harsh "supermarket lighting" and personality-free design makes no attempt to fit in with the look or history of Union Square. "What were they smoking?" asked Tihany. So wonders Raymond Gonzalez, a security officer at the Virgin Megastore that occupies the building's ground floor. "The sculpture is really dumb, he said. "Yeah, it's ugly."