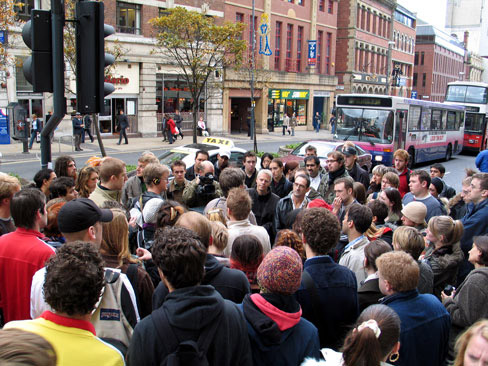 Between 7 and 11 October 2003, Bill Brown of the New York Surveillance Camera Players stayed in Leeds, England, as the guest of the Evolution 2003 Arts Festival. An off-shoot of the Leeds Film Festival, which has been presented since 1986, "Evolution" was founded in 2000 by Lumen (Will Rose and Dennis Hopkins) and specializes in artists who use television, the Internet and/or other digital media.

Located in Northern England along an old shipping canal that stretches all the way from coast to coast, from Liverpool to Hull, Leeds was once home to a great many textile plants, grain warehouses and flour mills. But, starting with the advent of the railroads, Leeds became an economically depressed and partially abandoned city. It eventually found its "revitalization" in the creation of a large shopping district, which is located in the city centre, and in catering to the needs of some 35,000 students, who attend a variety of institutions, including the University of Leeds and the Leeds College of Music.

On Tuesday 7 October, after arriving in Leeds and checking into his awful hotel (the newly built Park Plaza), Bill mapped out the locations of surveillance cameras installed in public places in the city centre. He concentrated on the area bordered by East Parade (to the West) and Vicar (to the East), and by Boar Lane (to the South) and Merrion Way (to the North). As the final version of his map indicates, this rather small, densely packed area is watched by a total of (at least) 153 cameras: 115 installed on the exteriors of privately owned buildings, and most likely operated by private security guards; 22 hidden within uncommonly large, black-tinted globes, and most likely operated by the police; and 16 installed atop poles, and definitely operated by the City Council.

In other words, the Leeds city centre is a super-surveilled place, one in which it is impossible to walk around without being videotaped, no matter where you go. The city centre occupies 16 square blocks; and so there are, on average, almost 10 cameras per block. By contrast, there are only 7 cameras per city block in the most highly surveilled neighborhoods in New York City and Chicago, which are of course much larger cities. With Leeds in mind, it's easy to believe the accuracy of the estimate that England as a whole is watched by over 2 million surveillance cameras.

The situation fairly boggles the mind. The police cameras installed on top of poles aren't enclosed within globes, as they are in New York City. As a result, all of their grotesque movements -- sweeping back and forth, stopping to watch someone in particular, following someone around, etc. -- are clearly visible to everyone. Though these cameras are almost always accompanied by signs, these signs contain a glaring mistake: they say "CCTV [Closed-Circuit TV] in Operation," when the cameras these signs accompany are in fact wireless or OCTV [Open-Circuit TV]. The police cameras that are enclosed, are enclosed within globes larger than any Bill has ever seen. Furthermore, these huge black globes are never accompanied by signs, which makes their dark presence on poles and the exteriors of certain buildings even more menacing. As if all this wasn't enough (!), the police also use highly visible Video Vans, which mostly cruise around at night and are probably equipped with infra-red cameras.

It's worth noting that, almost without exception, each privately operated surveillance camera in Leeds has a small sign on it that proclaims the name of the company that manufactured it. And so, every time one sees a camera, one also sees the name of a company (ADT, Secom, Philips, Symantec, Securicor, etc etc). It's a form of advertising. This clearly suggests that, not only are surveillance cameras designed to create an environment in which it is safe to do business, surveillance cameras are themselves a (big) business.

The next day, on Wednesday 8 October, Bill -- stepping outside the "Evolution" festival -- gave a presentation to students enrolled in the Fine Arts Department at the University of Leeds. About 35 people were in attendance. As a result of the host's bad planning, the room location was changed twice, and the video-player didn't work, which meant that Bill didn't show the video he'd planned to. There were, nevertheless, a lot of questions, most of which concerned the activities of the Surveillance Camera Players (SCP) or Bill's opinions on various matters. Only a few questions were posed in the name of "pragmatism" or from the position of "Devil's advocate." Afterwards, Bill stayed on to talk to several first-year students about their up-coming projects.

On Thursday 9 October, Bill was quite busy. At 11:15 am, he gave an hour-long presentation about the SCP to an "Evolution" audience. Hosted by the Ster Century Cinema, which is part of "The Light" shopping mall, this presentation was the same one Bill gave the previous day, only this time the video -- the SCP's version of George Orwell's 1984 -- was screened without problem. More than 100 people were in attendance. Once again, there were a great many questions; but, this time, about half of them were "pragmatic" in nature (i.e., less questions than thinly disguised objections). One woman had the nerve to ask if Bill had ever been the victim of crime; another said she was "disturbed" by the fact he was wearing a suit and tie, and not dressed the way she imagined people like Bill should be dressed.

And yet, immediately after his presentation, when Bill offered a walking tour of surveillance cameras in the city centre, there were in attendance over 50 people, all of whom were clearly supportive of Bill's unrelenting critique of surveillance, police departments and the State. The group didn't have to walk far to see the three types of cameras Bill had mapped. Indeed, the group didn't have to do any walking at all; all it had to do was stand still at the northeast corner of Albion and the Headrow, a spot from which the group could see -- and be seen by -- all three camera-types.

Bill had expected that there would be problems with the police. Before departing for Leeds, he'd been contacted by a reporter for The Guardian, who'd told him that the Leeds City Council -- one of the sponsors of the event -- had already expressed discomfort with the proposed walking tour. In particular, the Council was uncomfortable with the reference to "the conditions under which the cameras do not work" in Bill's description of what the proposed walking tour would highlight. This clearly suggests that the Council is experiencing problems with its system, and doesn't want this fact publicized, or that the Council is all-too-aware that its system can easily be interfered with. In any event, there were no problems at all. The police simply used the nearest pole-mounted OCTV camera (it was right across the street) to keep a careful "eye" on the walking tour the entire time it was taking place.

There was sufficient interest for a second walking tour, which took place at 5:30 pm. Meeting at the same spot as before, this tour was attended by about 10 people, all of whom had been at the first one. And so, rather than offer the same program a second time, Bill moved on to other, more advanced subjects (automated surveillance, targeted assassinations, and UAVs). As before, the group was obviously being watched by the OCTV camera across the street.

Once he'd concluded his remarks and answered people's questions, Bill led the group around the corner and into heavily surveilled Dortmund Square. After explaining what he was about to do and inviting others to join him, Bill began performing God's Eyes Here on Earth in front of one of the pole-mounted police cameras. He was joined by 6 other people, including a homeless man who "prayed" to the camera by making an internationally recognized gesture for fuck you. When the watcher turned the camera away and pointed it in the opposite direction -- as if refusing to give the performers the satisfaction of knowing that their gestures had been seen -- the group picked up, moved to the spot in which the camera was looking, and started the performance again. Once again, the camera turned away and refused to look. Success was declared, and the group went off to find a pub.

In the context of "Evolution 2003," Bill's contributions were clearly out of the mainstream, which flowed from people who are 1) artists, not political activists, and 2) formalists, that is, artists for whom "content" is secondary, irrelevant, absent or "emptied out." Many of these people are also academics, which means they are bad at answering questions, incapable of admitting that they might be wrong, and very boring to watch "in action" (as "speakers").

Among the worst offenders were Takahiko Iimura (filmmaker), who makes Lettrist-style avant-garde films so bad that they are quite unintentionally laugh-out-loud funny; Ben Rubin (a musician and programmer), whose recent multi-media installation "The Listening Post" makes the automated gathering and analysis of intelligence ("data mining" or "data-veillance") seem innocuous, even desirable, rather than dangerous and alarming (the project was co-produced by US military contractor Lucent/Bell Labs); Woody and Steina Vasulka (pioneering video artists and founders of The Kitchen), who are a classic patriarchal couple, only make abstract art, and refuse to question the socio-economic system that produces the technology they are fascinated by; and Kevin McCoy (a video artist and programmer), who combines Rubin (aesthetizes "data mining") with Vasulka (refuses to question the socio-economic system that produces the TV shows and movies he is fascinated by).

Easily the worst talks were given by the academics who aren't artists and were only at "Evolution 2003" to facilitate discussion, not offer presentations of their own: Griselda Pollock, director of something called the Centre for Cultural Analysis, Theory and History; her husband Ryan (not even on the programme! talk about nepotism . . .), and Zygmunt Bauman, who's found a way of re-heating cold Baudrillard. Each of these people were politically reactionary, smug and in love with the sounds of their self-satisfied never-interrupted voices.

There were, however, some bright spots. Though their respective politics and public-speaking skills could use some work, both Cory Arcangel (a musician and programmer) and Matthieu Laurette (a TV personality and video producer) were energetic, cute and funny. And though he lets people like Griselda Pollock walk all over him, Gustav Metzger (an artist and writer) was great: insightful, relevant and inspiring.