Police departments in both England and the USA have been using "video vans" (automobiles equipped with video cameras and recorders) for over 30 years. These vans operate either overtly or covertly, depending on the context: at political demonstrations or during night-time patrols, when deterrence is in play, the vans are clearly labeled and/or have easily spotted antennae on top of them; but along international borders, when stealth is paramount, the vans are unmarked and parked in out-of-the-way places. 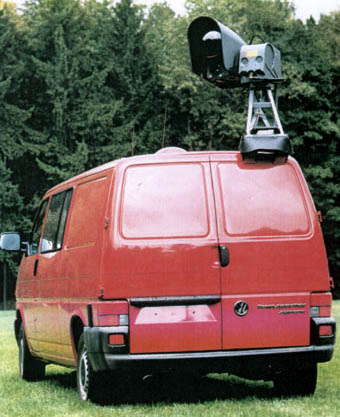 But it is only recently that the US military has started to use such vehicles, which are, of course, unarmored and thus vulnerable to attacks by weapons never used against civilian law enforcement authorities (rockets, grenades, rocket-propelled grenade-launchers, etc etc). That is to say, the increasing involvement of the military in "operations other than war" -- "the war on drugs," civilian disturbances such as the 1999 anti-WTO protests in Seattle, and post-September 11th "homeland security" -- has required the military to make increased use of unarmored surveillance vehicles. 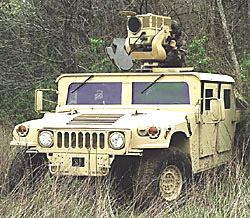 (USA, 2003: an Iraq-bound "Hummer" equipped with a long-range surveillance camera.)

As a result of increased and overlapping demand, these vehicles are becoming more and more technologically sophisticated. Note the impressive interior of the Border Patrol's new "smart truck" (below). 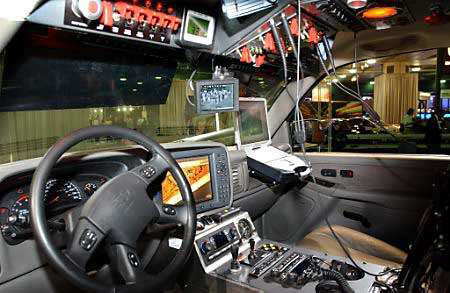 (US/Canada border, 2003: a baseball game is visible on the tiny screen, top center of the picture.)

For reasons of "security," to prevent people from recognizing it if they saw it out on the road, the press wasn't allowed to photograph the van's exteriors. Its armor is secrecy.