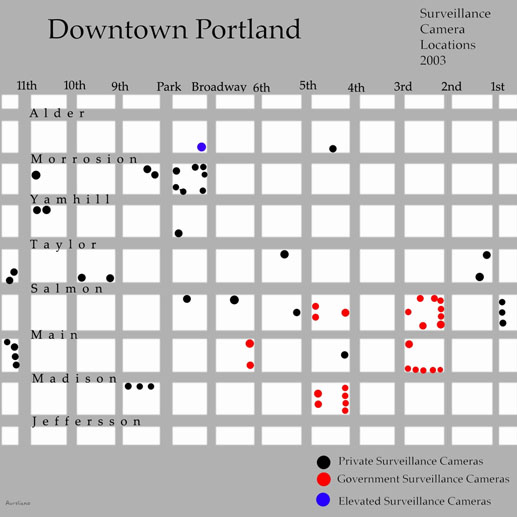 Between 11 March 2003 and 15 March 2003, Bill Brown of the New York Surveillance Camera Players was in Portland, Oregon. Brought to the "Rose City" by the independent arts group Red76, Bill began his stay by making maps of locations of surveillance cameras installed in public places. Based upon information and suggestions he received from his gracious and very generous hosts, Bill mapped out two locations: Downtown Portland and Old Town. The first was chosen because of its dense concentration of office buildings and shopping centers, while the second was chosen because it is, by contrast, a poor neighborhood, but one that is slated for "renovation" (gentrification) in the near future.

Like New Haven, Connecticut, which Bill mapped out a few weeks before coming to Oregon, Downtown Portland has "few" surveillance cameras by New York City standards, i.e., "only" 61 of them. But a very large proportion of these cameras (25 or 40 percent of them) are operated by the government at one level or another (city, state or federal). In heavily surveilled neighborhoods in Manhattan, the "typical" ratio of government to private-sector cameras is 10 percent. And so, one can predict with certainty that, if and when the private sector starts installing surveillance cameras in public places, there will be more than 250 private cameras in operation in the 70-square-block area known as Downtown.

A couple of the cameras currently in operation in Downtown Portland deserve specific mention. Easily the most notable is the "sky cam" that, from the top of a building on Broadway and Morrison, points down into the heart of historic Pioneer Square. One hears that this camera is operated by a location TV station, which imagines itself clever when it violates the privacy of the people who happen to be enjoying the meagre comforts of this all-brick "urban park" by using these unwitting people as walk-on actors in its cut-away presentations of Portland "as it really is." But its unlikely that the Portland Police Department (PPD)-- obviously a big fan of covert video surveillance, which it uses as part of "the war on drugs" -- would be uninterested in receiving a feed from this camera, which just happens to be pointed directly at that part of the square in which people (mostly youths and the homeless) hang out at all hours of the day and night.

The other notable Downtown cameras are installed on the exteriors of the Mark O. Hatfield Federal Building. Built in 1997, that is, in the aftermath of the bombing of the federal building in Oklahoma City, the Hatfield is a "smart building." All eight of its exterior surveillance cameras are globe-shaped, fully integrated into the building's design, and thus very difficult to spot. As a result, the Hatfield is strikingly similar to the highly security-conscious buildings now being constructed in Manhattan, that is, "post-September 11th."

Old Town, of course, has fewer surveillance cameras than Downtown, i.e., "only" 18 of them. The majority of these cameras (13 in total) are operated by private companies. Significantly, a good proportion of these private cameras are fakes, that is, aren't plugged in or are obviously empty camera-shaped boxes with no devices inside. Bill also noted (but didn't tabulate the exact count of) a large number of prominently displayed signs that declare the area under continuous video surveillance, but, in every case, he couldn't find the camera(s) to which these signs referred. This suggested to him either that the signs refer to cameras in operation inside those premises, not outside of them, or that the signs are also fakes, references to cameras that simply don't exist.

Of the 5 cameras being operated in Old Town by official authorities (either the PPD or the government), two of them are worth mentioning. In a manner resembling traffic flow-monitoring cameras, they are installed as a pair on top of a traffic sign at the intersection of Burnside Street and Fifth Avenue. It must not be a coincidence that Burnside is involved: this centrally located and busy street, which runs west to east, cuts the city right in half. One of the cameras looks across this street, that is, from the southern, Downtown, rich side of Portland over to the northern, Old Town, poor side. Perhaps drug dealers stand there -- on their side -- because it is the first place that drivers can stop to buy a bag of dope after they've crossed over the Willamette River, which divides Portland along a West-East, Work-Live axis. In line with this hypothesis, the second camera in the pair is positioned to look straight down, that is, at the other (the rich) side of the intersection. This second focus point is a peculiar place: cars would only stop there if traffic is very seriously congested (which is rare in Portland) or if drivers, right after going through the Fifth Avenue intersection, are stopping to buy a bag of dope before they resume their trip across the Willamette and towards home.

At around 11 pm on Thursday 13 March 2003, Bill gave a 45-minute-long presentation about the Surveillance Camera Players at the "International Arts Exhibition," which Red76 presented at the Laurelhurst Theater (Burnside and 28th). Like the Exhibition itself, Bill's talk was very well attended: over 90 people were there. After giving a brief over-view of the SCP's activities, Bill screened a videotape of the group's performance of Orwell's 1984. Before opening the floor to questions, Bill made a few remarks about the SCP's use of detournement; the group's focus on the State, rather than on corporations; and its refusal to play detective or rely upon irony. There were several questions, most of them concerning technological issues. After the presentation was over, Bill handed out copies of his maps.

The next day, at 2 pm, Bill offered a walking tour of Downtown, based upon the map he'd made. Approximately 25 people showed up and stayed with the tour for the entire time. Beginning in Pioneer Square, underneath the "sky cam" described above, the tour proceeded to Nordstrum, which is ringed on all four sides with surveillance cameras. Looking to create a little drama, Bill slapped one of the SCP's "Surveillance Camera Notices" on the sign that said "Nordstrum." From out of nowhere came a security guard -- a blond-haired woman dressed in full corporate attire -- who immediately removed the sticker and warned Bill that "there'd be trouble" if he "did that again." Three male security guards stood several feet off, uninvolved for the moment but ready to spring into action if needed. Bill calmly explained what the sticker said and why he'd put it on Nordstrum's building. "Why are there no signs warning the public that Nordstrum is using surveillance cameras to watch public places around its store?" he asked. "You'll have to ask corporate regional headquarters," was the security guard's irritated and not very friendly response. No matter what Bill said or asked, the woman responded that Bill would have to take his concerns up with corporate regional headquarters; she herself had nothing to say about any of it. The (lack of) "conversation" was quite instructive.

Proceeding to the Mark O. Hatfield Building (see above), the walking tour -- or, rather, its guide -- sought once again to create a little drama by lingering underneath and talking about the building's surveillance cameras. But this time, the bait wasn't taken. And so, without (further) incident, the walking tour ended amid declarations that someone should keep the initiative going: make new maps, update the "old" ones, and give walking tours after Bill's departure. Several people said that they would be interested in forming an SCP group in Portland. Hopefully someone will.