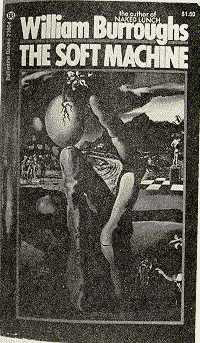 William S. Burroughs' novel The Soft Machine (first published 1961, revised "first" edition published 1966) doesn't seem to have been written by a person. The disorder of the narrative, the absence of a "plot," the fragments and phrases unintegrated into "proper" sentences, the erratic and generally arbitrary use of punctuation -- all this suggests that the novel wasn't so much "written" as spat out by a "Beserk machine."

The machine in question is the "control system," variously identified as the gendered human body ("the soft machine" itself), sexual reproduction, time, and spoken language; and it has been driven beserk by Burroughs, who has used the fold-in and cut-up methods of juxtaposition to introduce "random" elements into the (de)composition:

Whatever you feed into the machine on subliminal level the machine will process--So we feed in 'dismantle thyself' [...] We fold in writers of all time in together and record radio programs, movie sound tracks, TV and juke box songs all the words of the world stirring around in a cement mixer and pour in the resistance message "Calling partisans of all nation--Cut word lines--Shift linguals--Free doorways--Vibrate 'tourists'--Word falling--Photo falling--Breakthrough in Grey Room."

Because "sex was perhaps the heaviest anchor holding one in present time," a great deal of the material fed into and spat out by the "Beserk machine" concerns Burroughs' own (homo)sexuality. Obsessive reference is made to male genitalia, buttfucking, rectal mucus, semen, and so forth. "Sexual prudery and reticence" are challenged and tested, nothing is too "private" or "embarassing" to be disclosed: "There are no secrets anymore." Everything is (out in the) open, like the inscriptions on the backs of post cards or the pictures on the fronts of post cards that are "dirty."

As it happens, the phrase "post card" appears over and over again in the flow of short, post-card-like notices that make up large parts of The Soft Machine. Here they are, all 12 of them:

Burroughs' novel is about getting "out of time and into space." And so his post cards are always "dead" post cards, constant reminders that the past (a "part" of Time) is dead. The phrase "dead post cards" also recalls "dead letters," that is, letters or parcels that for some reason cannot be delivered to their intended recipients, nor can be returned to their original senders, and so are retained by the Post Office, which either destroys them or auctions them off.