Your Guide to New York's Spycams 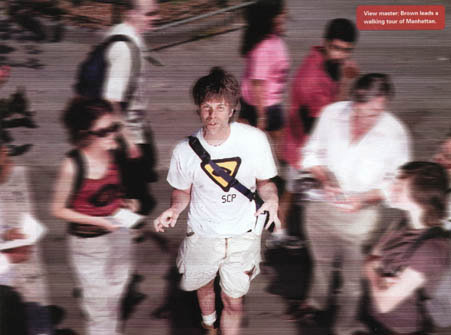 Bill Brown may be paranoid, but he knows exactly who's watching him: pretty much everybody. The freelance legal proofreader's free walking tours of New York City go way beyond art deco buildings or places Henry James wrote about. In 12 Manhattan neighborhoods, from the Lower East Side to Harlem, Brown guides groups to surveillance cameras, pointing out the spots where Big Brother is most fraternal.

A recent Sunday found Brown and his group in City Hall Park observing an NYPD camera 25 feet up on a cast-iron light pole. By Brown's estimate, it's one of 7,200 electronic eyes in Manhattan, the most surveilled borough of America's most surveilled city.

Since the mid-'90s, Brown has been a member of the Surveillance Camera Players, a guerilla group that stages skits for cameras and passing crowds. ("That was the art," he says [referring to the performances]. "This [the walking tours] is the science.") After 9/11 -- and some FBI snooping on his Web site -- Brown shifted his focus to the tours. Public interest picked up after the attacks, when the federal government started pouring money into new [Coast Guard] cameras on Staten Island. Now, he says, "fewer people think I'm a conspiracy theorist."

Brown bolsters his 90-minute raps with black-ops talk and his own hand-drawn maps, hoping to raise consciousness about the spycams proliferating like high tech kudzu. He's as riled by the idea of bored public servants swiveling their lenses to check out hot chicks as by violations of the Fourth Amendment.

Either way, Brown -- a former American lit professor at the Rhode Island School of Design -- expertly cultivates a mood of suspicion. He's so good that 15 minutes into his tours he starts to sound like the voice of reason. When someone asks about two odd metal brackets protruding from the top of a nearby office building, Brown dismisses them as pulley arms for lifting heavy equipment onto upper floors. "Yeah," says another onlooker, "but what are they lifting so high?"

(Written by Paul O'Donnell and published in the October 2003 issue of Wired Magazine. Comments [in brackets] by Bill.)