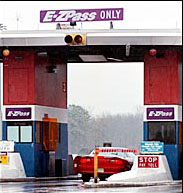 Along highways, bridges and tunnels in 18 out of 50 states, some kind of Electronic Toll Collection (ETC) system is in use: in California, the ETC system is called "FasTrack," and in New York State, it is called "E-Z Pass." In these systems, very sophisticated antenna ("readers") are used to automatically identify the vehicles that travel by them. They do this by working in pairs: one antenna continually sends out a radio-frequency (microwave) pulse, which returns only when it hits a transponder. (Pulses or "search" beams can also be sent out by video cameras or lasers, but these are more easily affected by bad weather conditions.) Commonly known as a "tag," the transponder is usually located on the inside of the car's windshield. The "bounce back" from the transponder is received by the second of the two antennae, which gathers up into a data packet the transponder's serial number and the date, time and location of the "reading"; it also generates a unique identification number. After encrypting the contents of this packet, the unit then uses fibre-optic cables, cellular modems or wireless transmitters to send it off to a central location, where computers use the unique identification number to identify the account from which the cost of the toll should be deducted.

(If it determines that it is receiving signals from a tag that has been reported stolen or is owned by someone who is over-due in his or her payments, the second antennae can automatically trigger a carefully placed surveillance camera that will take a picture of the car's license plate. Once again using wireless transmission, this surveillance camera will send the picture to the central processing center, from which a sternly worded warning, a hefty fine or even an arrest warrant might be issued.)

The readers were originally installed in only a few locations, i.e., at the entrances to highways and the like; to be exact, underneath the pavement or in the booths through which the cars passed. In either case, the cars had to go slowly enough for the readers to identify the transponders and receive the necessary information from them.

In New York State, readers have been multiplying ever since September 1997, when the New York Police Department (NYPD) used E-Z Pass toll records to locate and track the movements of a car owned by Nelson G. Gross, a New Jersey millionaire who had been abducted and murdered. The NYPD had neither a subpoena nor a warrant to obtain those records; the police simply asked the Metropolitan Transportation Authority (MTA), and the MTA complied. This set a very bad precedent. Though Gross wasn't alive to complain about it, his privacy had been violated. Access to those toll records also permitted access to all sorts of sensitive information, including his billing address, his credit card number, his license plate number and his Social Security number.

In response to this story, a couple of local politicians made some noise about protecting the privacy of drivers who use transponders to pay their tolls. Some called upon computer security experts to show that, like all wireless systems, E-Z Pass is insecure and can easily be hacked into by thrill-seekers, criminals or terrorists. A few entrepeneurs started selling little shielded bags or boxes into which the transponders can be placed when they are no longer in use (the transponders are in fact constantly active and can be read by all kinds of "readerly" devices). Ironically, these shields are simply "thicker" versions of the shields made available by the same government authorities that administer the ETC system.

In February 1998, the MTA announced that -- near the Tappan Zee Bridge (the site of the first reader in New York State, installed in 1993) -- it had just concluded a successful "experiment" with readers that could detect and extract information from transponders even though the cars to which they were attached didn't slow down. These "high-speed readers" were only three-feet tall and could be placed just about anywhere. As a result, they permitted the ETC system to do something it was never intended to do: namely, collect truly huge amounts of information about such non-toll related phenomena as traffic flows, speeds, densities and delays (all of which, incidentally, can be videotaped by either flow monitoring or security cameras that have been automatically activated by the readers).

Since then, high-speed readers have been installed along a great many State-owned roads and highways; they've also been installed atop many residential buildings in New York City. In addition to serious concerns about privacy, these devices raise (even more) serious concerns about health. Readers are, as we've already noted, microwave devices; continuous exposure to microwave radiation isn't good for living creatures. Furthermore, the power levels necessary to operate high-speed readers is quite high, and many of these devices can't be placed close to the street, which means that their power levels must be even higher and thus even more dangerous.