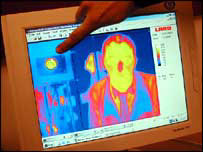 Unlike video cameras, which can transform beams of visible light into electronic images, infrared imaging devices can make electronic images out of emissions of heat (beams of "thermal radiation"), which are invisible. Unlike thermometers, which require direct physical contact, thermal-imaging devices such as infrared "cameras" can "see" and precisely measure differences in heat from a distance. It that way, infrared cameras are similar to video cameras, which are also long-range devices. But unlike video cameras, thermal-imaging devices can see through or render transparent all kinds of impediments, obstructions and barriers: airborne precipitation (rain, snow, fog); darkness (heavy cloud cover, night, power blackouts); liquids (oil, coolants, large bodies of water); and even solid objects (containers, buildings, the surface of the earth itself).

Infrared cameras are currently used by the Bureau of Customs and Border Patrol to detect and prevent illegal immigration across the USA's borders with Canada and Mexico; by the United States Coast Guard to monitor the movement of commercial container-ships in and through certain major ports (Valdez, Alaska, and New York City); and by disease prevention-and-control experts at airports in China and Singapore to detect SARS-related fevers (see image above).

"Forward-looking" infrared (FLIR) cameras are capable of scanning the horizon, instead of remaining focused on a single spot, and so are well-suited for use aboard aircraft. A brief run-down, from top to bottom: the National Security Agency (NSA) uses infrared-capable satellites to monitor activity in foreign countries, while the National Oceanographic and Atmospheric Administration (NOAA) uses them monitor storm activity and environmental patterns (global warming). The Federal Bureau of Investigation (FBI) uses infrared-capable spy planes ("night-stalkers") to monitor people suspected of being terrorists, while the Central Intelligence Agency (CIA) uses them to monitor people suspected of being part of international drug cartels. And, last but not least, a variety of law enforcement authorities use infrared-capable helicopters to look for fires, automobile crashes, industrial accidents, and "hydroponic" systems used to grow marijuana in-doors.

That last bit (searching for hydroponic growers using infrared-capable helicopters) is quite controversial. It's also unconstitutional, at least according to the U.S. Supreme Court, which ruled in U.S. v. Kyllo (2001) that the police can not use infrared cameras to locate "suspicious" concentrations of heat in private places and then get warrants to search for hydroponic systems (which is what they had been doing up until then, and were supposed to stop doing from then on). Instead, the police have to get a search warrant before they can use an infrared camera to search private property for "suspicious" emissions of heat.

And yet the news is still filled with stories in which police departments -- using infrared cameras aboard helicopters and/or spy planes -- have located and destroyed marijuana plants growing in hydroponic systems installed in private places. Take for example this story, which was published 7 October 2003 in "The Charleston Daily Mail" (West Virginia).

Through the first nine months of 2003, State Police have seized and destroyed 73,079 marijuana plants. That's more than double the number of plants seized in all of last year [...] 1st Sgt. Steve Jones [of the Bureau of Criminal Investigations] attributes the jump in plant seizures to increased flight surveillance by troopers and solid aerial support from within the agency, the Army National Guard, the U.S. Drug Enforcement Agency and the state's Civil Air Patrol [...] Jones said police would continue focusing on large outdoor patches and also try to track down more clandestine indoor operations. The indoor plants, for obvious reasons, are harder to locate, but Jones said technology now gives investigators an edge. Other than thermal imaging cameras, Jones declined to say what kind of tools authorities use, for fear it might tip too much of their hand, but he said it was cutting-edge stuff.

Perhaps there is solace in the notion that infrared cameras, despite their technological sophistication, run hot, have to be kept cool, and so perform poorly in "warm" temperatures (which, ones hears, can sometimes be anything over 68 degrees Fahrenheit). This is, apparently, a persistent problem for wireless, remote-controlled infrared cameras along America's border with Mexico, where temperatures quite frequently climb and stay way over 68 degrees. We've personally seen housings for small infrared (so-called "bullet") cameras, installed on the exteriors of buildings, that were filled with condensed water.